All I've heard in the campaign news lately is so tawdry ... all about Bush, Dick, and Johns (I'm writing a letter of protest to the FCC right now!).

But there are other people in the race you know. For example, my brother says he's going to vote for Dennis Kucinich, whom he saw speak at UCLA. He's got a sense of humor, that kid.

Dennis Kucinich, the Congressman of the Cleveland district, is the only Democratic candidate who hasn't dropped out the race since Kerry locked up the nomination. Raised in poverty as the son of a truck driver, he became the 31-year-old "boy mayor" of Cleveland (he youngest person ever elected to run a major American city) but he lost re-election after he refused to sell the city’s 70-year-old municipally owned electric system to a private competitor. 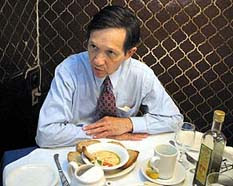 He also happens to be the only member of Congress who is a vegan. He turned to a vegan diet nine years ago first for health reasons (he is from Cleveland, after all), and because his sweetheart follows the diet as well, but now espouses the diet for ethical reasons.

*He has called for labeling and safety testing of all genetically engineered foods.
*He would include advocacy of animal rights in his proposed cabinet-level Department of Peace.
*He supports numerous new incentives for farmers to convert to sustainable and organic farming and ranching techniques.
*He cosponsored every piece of major animal protection legislation in Congress.
*He would fully fund efforts to eradicate hunger by dramatically increasing our allocation to the UN World Food Program and push for the immediate cancellation of all bilateral debts of countries facing hunger.


His typical breakfast before was steak, eggs, cereal and six glazed doughnuts; now he might have oat groats sprinkled with walnuts, bananas, coconut and raisins, a bowl of miso soup, wheat toast and a plate of fresh vegetables.

Six glazed donuts?? I like donuts very much, but I'd go with the vegan breakfast here.