Thank Goodness Easter is Over 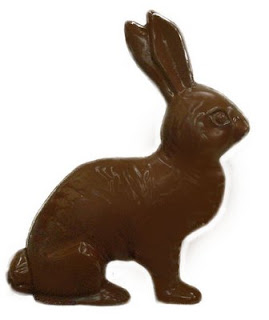 It's a great relief to me that Easter season is over, because Easter candy is quite possibly the most unappealing holiday candy of the entire year. There are Peeps (no one actually eats these, do they?), there are Cadbury eggs (raw eggs, even pretend candy raw eggs ... eww), and then there are the aisles and aisles of cheap, sugary, probably grainy and untasty, milk chocolate bunnies.

In third grade, we had to sell foot tall milk chocolate bunnies. I ended up eating a lot of them myself. I must have overdosed then, because I can't stand the idea of eating a Easter chocolate bunny now.
8 comments:

Not long ago, I decided to give up coffee for a few months. I didn't drink that much to begin with - 16 ounces at the most, spaced out into tiny sips throughout the workday, thanks to my handy thermos. Usually I wouldn't even finish it. That's not much, right? So how bad could it be to stop drinking coffee for a while?

I kept a giant plastic bottle of water on my desk in the morning instead of a thermos. I sipped cold water and felt virtuous.

But it's now almost two months into cutting out the morning coffee, and you know what? I'm done. I'm so over the experiment.

I don't need the thermos, but I think I'm going to go back to coffee in the morning. It wasn't that I got headaches or got all Mr. Coffee Nerves on everyone (okay, maybe a little), but starting mornings without at least a few sips of steaming hot something just didn't feel right. I love tea, but it's more of an afternoon and nighttime thing, and hot cocoa is too sweet. Half a cup of hot, black coffee, on the other hand, is perfect.
4 comments: 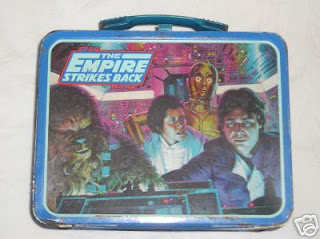 I previously mentioned that recently, Foodgoat resumed a practice of his youth. Tired of buying the super sweet sodas (or, if you must, pop) and generally opposed to paying for bottled water, he started buying milk at his work cafeteria to drink with his homemade, bagged lunch. True, it's skim milk now. But not many grown-ups are pairing their lunches with milk at all.

Today he is having a peanut butter and jelly sandwich, a Granny Smith apple, a bag of Fritos, and milk. How charming is that? It makes me want to buy him a Star Wars lunch box on eBay.
9 comments:

Can I Get A Napkin Please?

I do not generally associate food courts with delightful dining experiences, but then I wasn't lucky enough to be one of the unwitting customers for this hilarious and totally awesome improv-infiltrated food court musical. 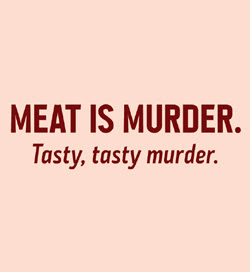 I saw this classic Threadless t-shirt on sale for $9 today, and I thought to myself, I'm glad I eat meat.

I don't feel any guilt about eating the delicious flesh of animals killed solely to satisfy my hunger. None at all. Should I?
7 comments:

It's an old wives' tale that eating cheese gives you nightmares. I've actually never heard of this, until I came across a study by the British Cheese Board in 2005 that looked into it.

They found that eating cheese before bed actually helps with getting a good night’s sleep (it's the tryptophan). The best finding, though, is that different cheeses cause different types of dreams. For example:
Now this is a study just crying out for verification and reproducibility. Time for some nighttime snacks!
1 comment: 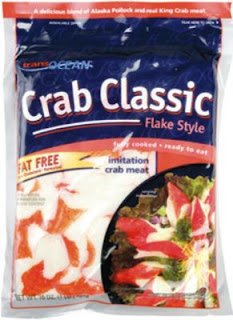 Times being what they are, the time had come to pass up on the crab, and to try out krab.

I know I've had krab, or imitation crab, before. I must have - it's often used in California rolls or in crab dips and the like. But it's not something I really remember tasting.

Crab, on the other hand, I've tasted - and love. When my parents bought crab, it was fresh - so fresh that if you dropped it you'd have to chase it to get it back.

Foodgoat doesn't quite that fresh, and I'm not even sure we can really get that level of crabbiness here in Cleveland. But we do often buy excellent, freshly made crabcakes from the West Side Market and the occasional can of crabmeat.

Alas, that can can come in at upwards of $25 a pound. Imitation crab, we noticed, rang up at $11. Would it be worth it? It was time to find out.

Imitation crab is actually made from fish - specifically, surimi, which white fish meat that is ground into a paste and becomes gelatinous and rubbery when cooked. Usually that fish is Alaskan or walleye pollack, a very mild tasting, plentiful fish (it's certified as a sustainable fish, so you can eat it with confidence that you're not draining the oceans of life). Surimi has been made for over 800 years in Japan (it's also used to make fish balls and other types of processed fish products), but imitation crab meat was introduced in the United States in the early 1980s.

To turn surimi paste into something crab-like in texture, they add starch (usually wheat or tapioca, for firmness), sugar (for preservation), and egg whites and vegetable oil (for cohesion and shininess). To give it a crab-like flavor, they add both natural (from actual crabs) or artificial (from New Jersey) flavorings. Add a little food coloring to give it a crab-like pinkishness, and all the ingredients are in.

This paste is formed into smooth sheets, which are then cut into strands that are rolled into a rope, and steamed cooked - and in the end, it looks a lot like crab (and, some say, like string cheese).

We initially got the krab for California rolls, but ended up making a crab salad instead. Texture-wise, it was awfully rubbery, rather than meaty. Taste-wise, well, I really wouldn't mistake it for real crab in blind taste test.

However, it wasn't bad - - it was mild and vaguely crabby and generally inoffensive. It just wasn't really much like crab.

But, imitation crab is quite popular and lot of people genuinely like it. I think I would be more enthusiastic about it if it didn't pretend to be crab. If we just called it fish fillets or ground pollock or something, I feel like it could stand pretty well on its own. Obviously, it does all right in California rolls, mixed with avocado and rice and wasabi. It would probably do excellently in a creamy seafood dip or a mixed seafood cassarole.

Sick and Tired, of Being Sick and Tasteless

It's no fun being sick. Especially when it's a sickness that hits Foodgoat, then takes me down, then gets Foodgoat for a second go round. And a sickness that wipes you out, and keeps us in bed, delirious and coughing, for days, and one that continues to linger on annoyingly for weeks.

But, even worse, being sick means having losing your sense of taste and your appetite. When your great comfort and enjoyment in life comes in food, it's depressing to find that nothing tastes good and nothing even sounds tasty. As a result, we haven't managed to make a good, interesting meal in weeks.

Instead, the only things we have had the energy or inclination to eat are Cheerios or bagels with cream cheese. One day we managed miso soup. Oh, and lots and lots of hot tea with honey. Indeed, we've gone through more honey in two weeks than we have in two years. Everything else, though, just tastes like cardboard. Which is really very sad.
4 comments: