The dog blogger BiscuitGoat continues her takeover of the Foodgoat blog ...

If you watch, as I do, Battlestar Galactica (for I too like to ponder the fate of humanity) you know that one of the great mysteries yet to be revealed this season is WHO IS THE FINAL CYLON? The fans have been debating for months - but I, Biscuitgoat, knows who it is.

Furthermore, I am willing to reveal it. Beware, this is a tightly kept secret! 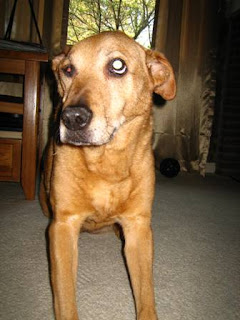 It's me! You weren't expected a Dog Cylon, were you? But then again, why shouldn't there be a Fur Job among the frakkin' toasters? There are dog robots even now, providing companionship to kids and elderly Japanese people, so it just stands to reason that dog Cylons should have been developed alongside the humanoid Cylons. As we have seen this season, the Cylons can experience the full range of feeling and love, so naturally one would expect that their first inclination would be get a wittle puppy wuppy.

And now that you have taken a good look at me ... you must realize that yes, you've seen my kind before. A dog that just looks ... dog-ish. No particular breed, just plain old stereotypical dog. Everywhere you go, you'll see the same dog model.

The dog blogger BiscuitGoat continues her takeover of the Foodgoat blog ...

I haven't paid much attention to politics in my life. But two years ago, after passing the test (with flying colors, I might add) I became a Canine Good Citizen, so I feel it's my duty to contribute to the democratic process as much as I am able. Seeing as I'm not 18 yet though (4 more years to go!), I can't vote, so blogging and influencing the voting public it is.

Furthermore, in this election, there are Important Issues facing American dogs today. Not the least of these is the fact that there are over one thousand MWDs (Military Working Dogs) stationed in Iraq.

So, I consider each of the presidential candidates. First, I look at their pet record.

Obama doesn't have a dog, and has no pet-owning record that I've been able to find. (FoxPetNets has repeating insidious rumors that Obama has a friend who once owned a squirrel but that's just mean-spirited gossip.) However, he did make a significant campaign promise: when the election is over, he promised his daughters they could have a dog, whether or not he wins. Usually one can't trust campaign promises, but Obama seems to have a calm assertive energy, and I believe him. Plus, the man has excellent taste in ham. (I'm partial to prosciutto myself.)

Clinton has a dog - a chocolate Lab named Seamus. Seamus was a gift from Hillary to Bill after their Lab, Buddy, was run over by a car. Buddy came after their cocker spaniel, Zeke, was also run over by a car. I'm not implying any impropriety, and no investigations have ever been called for. It's just ... it seems rather careless of them. Maybe it's unfair. But I wouldn't trust her to walk me down a busy street, so I can't very well trust her to run the country.

On the pet ownership issue, McCain, though, takes the cake. Right now he has Coco, a mutt (who he once saved from the brink of death with his quick action!), Sam, an English springer spaniel, two more dogs named Lucy and Desi, two turtles named Cuff and Link, Oreo the black and white cat, three parakeets, and 13 saltwater fish. His ferret, alas, recently died of cancer. In the past, they have also had two mini-Dobermans, two snakes, one rabbit, a hamster, a mouse, an iguana and a gecko.

This makes it hard for me not to endorse John McCain. Clearly, the man can bring together an impressively diverse pack.

Still, I've got my reservations about him.

I must think of all my compatriot dogs stationed in Iraq. Remember, 100 human years is 700 dog years. That's a long time for us dogs. Our entire species could be completely different by then. And war is as hard on dogs as it on humans. Remember in "Courage of Lassie" when Lassie got drafted, and came under fire right on the front lines? SO SAD. Lassie had PTSD! She had such a hard time adjusting back to civilian life! She had flashbacks! I have tried to do my part by sending care packages of Bil Jac treats and Doggles to our dogs in Iraq, but wouldn't it be better for us to send them home, than for us to send them there?

And, this very large menagerie of McCain's might also be suspect as well. Isn't it only crazy old ladies who amass these very large packs?

And, there are other issues I must still consider: their position on pet insurance, affordable pet medication, and standards for regulating the dog biscuit industry. Like everyone else, I'm watching this election carefully.

*Opinions expressed here do not necessarily reflect the opinions of Foodgoat or Ladygoat.
3 comments:

The Dog Blogs the Draft 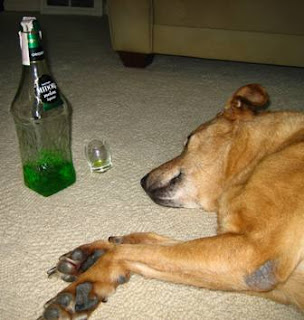 It's the football draft weekend again, and I'm just glad that Foodgoat is not trying to put a giant Browns foam finger on my head, so I thought I'd play his draft day game too: take a shot every time there's a trade between teams during the first round. Today he's drinking Midori, the melon liqueur. How bad could it be?

The Pack Will Provide 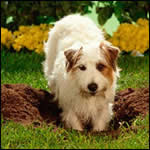 I have heard a great deal of anxious talk in the last few days among the humans about of food rationing. Now, this is not a new issue among us dogs. I have known several dogs who advocated the food hoarding lifestyle, including a husky who insisted on burying every bone she got in the backyard. It's understandable, after all, a dog has to have contingency plans. However, it's messy, the humans for some reason get generally displeased by the digging and stashing away, and there are freshness issues.

But most of all, I say, The Pack Will Provide. I've lived a long time and stayed with a couple of different packs, and there has always been food in my dish, even if sometimes it wasn't ham. Occasionally, the food was a little more crumbly than usual, but then another giant bag appears and all is right again.

Not only that, but I've hunted with my pack a few times now, and to be honest, it looks pretty easy. You just drive up to this window, and food comes out in a little bag. I've been able to hunt this way all year, so it doesn't seem to be seasonal thing. And so, I'm not going to start hoarding food, or worry too much about this allegedly coming food crisis. It's a lot of panic, IMHO. Certainly I don't think packs should be hoarding rice (I never touch the stuff myself anyway), as this induces further panic and drives up prices. Like the bones buried in the yard, you'd just get a lot of stale rice after a while. Be calm and submissive to the rice market.

Anyway, in the absolute crisis of my pack running out of food, there's always the grass in the backyard. And it's looking very long and green these days.
2 comments: 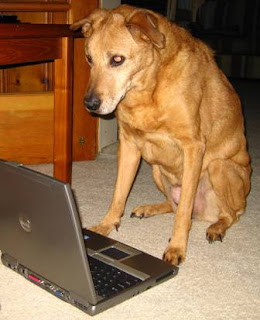 You may have noticed that Ladygoat and Foodgoat has been somewhat absent of late. They may tell you that they has been preoccupied with Some Recent Exciting Developments, but it looks to me that they have been doing the same old things they always do, which is sit in front of the TV and computer and try to warm their freezing cold feet under me while I'm getting my after-dinner nap (which, frankly, I resent).

Since they have been neglectful of the blog, I've decided to take the blog into my own paws. I'm pretty busy, what with sleeping and eating and paw licking and did I mention sleeping?, but I think I can squeeze it in. (If I'm good enough at it, maybe I can make enough to get that stimulus package, which I understand can buy a lot of biscuits. )

Expect to see a lot of posts about the various types of ham Foodgoat has been purchasing at the local Italian store.
1 comment: 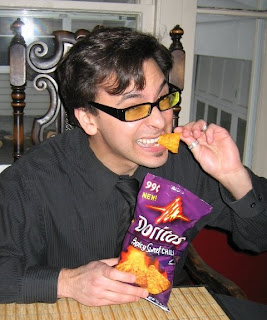 How much did we enjoy Dorito's Spicy Sweet Pennsylvania Primary Coverage From Chili-Delphia - The City of Brotherly Crunch! - on the Colbert Report last week?

Enough to try out the Dorito's new Spicy Sweet Chili flavored tortilla chips! (Not that we are ever influenced by clever marketing ploys at all.)

Foodgoat found them, surprisingly, not bad at all, considering that he doesn't care for the regular Doritos Nacho Cheese flavor much. A little spicy ... and then, yes, a little sweet. Crunch-goat-licious!
No comments: