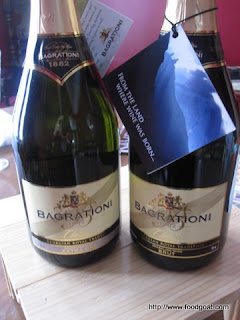 People don't drink sparkling wine nearly often enough.  Not nearly enough.  They reserve the champagne for New Year's Eve, and wedding toasts, and thereby deprive themselves of enjoying its effervescent delights just because spring has finally arrived, or just because the sun's out, or just because.  There's no reason to wait for special occasions - particularly since there are several perfectly nice ones to be had for an affordable price.
Among them we now add Bagrationi, a sparkling wine producer from the country of  ... Georgia?  I know, we had never heard of wines being made in that country bordering the Black Sea in Eastern Europe either.  Apparently Georgian sparkling wine have historically been primarily exported to Russia (as much as 80% of Georgian wine went to Russia, its second largest export product), but what with the Georgian-Russian relations being, ahem, tense, and Russia banning Georgian wine in 2006, Bagrationi has been aggressively developing new markets, including now the US.
But Georgia, and the Bagrationi company, has a long history of making sparkling wine.  By some accounts, Georgians have been making wines for eight thousand years and the modern word for wine may stem from the Georgian word for wine, gvhino.  A military officer from a branch of the Bagrationi dynasty, which ruled the Georgian kingdoms until Russian annexation in the early 19th century, brought the knowledge of French wine making to Georgia in 1882.
The Bagrationi NV Extra Dry was quite nice - clean tasting and balanced, light and pleasantly dry.  It wasn't the best sparkling wine I've ever had by any means, but it was fairly smooth and bright.  It was fine by itself, but I think with its clean taste, it should take well with other flavors in champagne cocktails like mimosas.  All in all, rather nice.
But what makes it particularly nice is its cost: the Bagrationi NV (non-vintage) sparkling wines come in at a very budget-friendly $14 a bottle.  Yes, some sparkling wines can even cheaper, but if they taste dreadful, they aren't worth their low price (I'm looking right at you, Cook's).  And there are several better tasting sparkling wines that I prefer, but they are typically cost more, around the $20-$30 range (J, of course, is my personal fave).

But at $14,  Bagrationi is really a pretty good value.  I'd say it's a great choice for wedding receptions and for a nice everyday type of sparkling wine - something good, but not too pricey.
Per FTC disclosure guidelines, we got two bottles of the sparkling wine to review for free.  But I would totally pay $14 for another bottle.
4 comments:

One of Foodgoat's earliest memories is of being held upside down while his father whacks him on the back to dislodge a piece of hot dog on which Foodgoat was choking.  It's happened to a lot of kids, especially those under three, which is why the American Academy of Pediatrics recently called for warning labels, or better yet, a choke-proof redesign of the beloved hot dog.
The only redesign I would approve of is the Octodog: 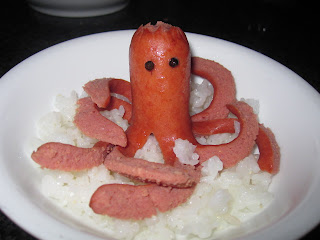 A regular hot dog, sliced up into eighths about halfway to two-thirds up (sixths if you want more structural integrity).  Each little leg is perfect for pulling off and eating by small hands.  Boiled in water or oil to cook and to achieve curly-legginess.   Black peppercorn or whole cloves for eyes (don't let kids eat these, though).  Served on a bed of white rice (or stuffed in to a bun, if you really must).  Splatter with ketchup and mustard as needed or serve on the side.  Of course, the top part (the head) still needs to be cut up into bits once the legs get pulled off and eaten. 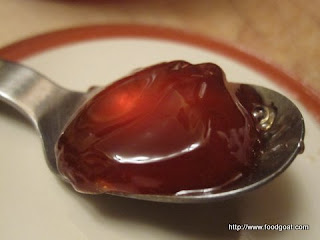 Boiled cider jelly is the easiest jelly in the world to make.

It is so easy that I made it without intending to.

I had started making boiled cider, which is a very boring name for ... boiled cider.  It is apple cider which has been boiled so that it is reduced to a syrup.  Apple syrup sounds much more appetizing, so I don't know why they don't call it that.


Boiled cider jelly is apple cider which has been boiled long enough to reduce it to ... jelly.

What happened is that I poured, oh, somewhere between a quart or two, into a saucepan.  I brought it to rolling boil, then reduced it to something more like a bubbly simmer.  I kept it going there for almost an hour, waiting for it to get syrupy.

Foam starts collecting on the top, which I skim off.  It does not appear to be getting much thicker, although it is reducing.  Boiled cider is reduced to about 1/7 of its original volume, but I can't tell exactly how much I'm reducing the cider.

Finally, after an hour, it has reduced to a mere inch or so on the bottom of the pot, but it doesn't really seem much thicker.  It pours.  It may coat the back of a spoon, but not very convincingly.

Once in the jar, though, and a couple hours later, I see I am wrong, for it has become gelatinous.

I have made boiled cider jelly. 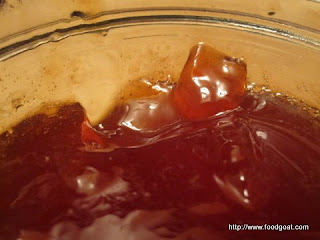 Apparently I had passed the 1/7 original volume level and went as far as 1/9 the original volume of cider, at which point you get boiled cider jelly all by itself, with no other additives.    Apples naturally contain pectins that will allow it jell.
Put a spoonful of this in your mouth and all you taste is APPLE, in all caps.  It's very sweet and intense and delicious.  Considering that we've left apple season behind, it's a wonderful way to recapture the taste of autumn.
But how to use it?  You can use boiled cider jelly as any other jelly, spread on toast for example, but you can also mix a spoonful in a cup of hot water for some instant hot cider.  You can also use it as a glaze for hams.  I am looking forward to using it as a kind of apple extract to add extra apple taste to apple pie.
4 comments:

100 Things to Cook: What Should Ladygoat Add to Her List

Last year, Lead Paint Cookbook posted her bucket list of 100 things she wants to cook. I think this is a great idea - I'm always idly thinking I should make this or that, only to forget about it soon after.   But put it on a list, where I can cross it off and check it off, now that can motivate me.  She is trying to get through her 100 items in one year, an ambitious undertaking which I can't even consider trying right now, but the list?  I can work on putting together a list.

My list is mixture of dishes to cook or bake and ingredients that I'd like to make myself - hence things like cheese and vinegar are on the list.  There are things on here that I may have tried once or twice but never did well, and things that I've always wanted to make and never got to.  There are dishes I've witnessed and eaten many times, like Foodgoat's chicken paprikash, but never made by myself.  Most things I've eaten and always enjoyed (llike longuanisa) and others that I've never had but sounds fun to make.  I didn't put them in any particular order.

But alas, I haven't come up with 100 yet.  I thought it would be pretty easy, but I seem to have reached a cooker's block at number 75.

So I'm soliciting suggestions!  Surely I can come up with a few more to reach 100!

The Kind of TV We Watch Now

So I'm especially excited to see the season 3 start next week, which will include a guest appearance by another of our favorites, Anthony Bourdain!

For the past couple of days, I have also had the very catchy Banana song (by the Aggrolites) stuck in my head.
No comments:

What is the Point of Light Beer?

The other day I was wondering ... why is there light beer?

I say this because I have had light beer maybe a handful of times in my entire life and Foodgoat never buys light beer.  In my limited experience, light beer is ... almost flavorless.

Yet light beers account for about 38% of the total beer market share.  So why do people drink light beer?

I thought light beer was just watered down beer, but light beer started in 1964 with a biochemist working at Rheingold Breweries, then an industry leader, who found an enzyme that prompted yeast to digest all the starch found in malt, resulting in beer with no residual carbohydrates and with less calories. Rheingold came out in 1967 with Gablinger's Diet Beer but it was a flop:  the TV commercial featured a super fat guy shoveling spaghetti into his mouth and downing a Gablinger's.  Apparently the beer drinking population saw the diet beer as a "sissy" drink that no "real man" drank.

All that changed when Miller bought Gablinger's, and in 1973 slapped a new label on the same beer calling it Miller Lite. More importantly, they ditched the fat guy, used ex-athletes and other macho, macho men to promote it, and came up with the "Tastes great, less filling" slogan.  Instead of aiming towards people worried about their weight, the campaign targeted young men with blue-collar occupations - the typical beer drinker.

Of course, it worked.  Miller Lite was a big hit, Bud Light came out in 1982, and by 1992 light beer became the biggest domestic beer in America.  (Since light beer typically requires fewer and cheaper ingredients, it often has a bigger profit margin as well.)


So, why is light beer so popular?

Foodgoat doesn't think it's the low calories.  It was a flop as diet beer, and while light beers tend to have lower calories than regular beer, it isn't always the case, and the difference is pretty minimal.  In fact, it's a myth that dark beers are loaded with calories. The calories in beer come primarily from alcohol, so beers with less alcohol content, regardless of how dark it is, have less calories.

Foodgoat doesn't think it's the taste, either.  Light beers really only taste good when they're ice cold, and one's taste buds are kind of numb.

So what is it?  Foodgoat thinks light beer exists for ... binge drinking.

Light beer, by being "less filling," allows you to drink more beer than if you drank regular beer.  Regular beer might make you feel full after a few drinks or so, but light beer, you can keep on chugging.  So if your goal is just to drink a lot of beer, light beer would seem to be a good choice.

Since I first came across light beer at a keg on second base during a fraternity game of sloshball, I can't argue with his theory.
3 comments:

Keep Beer Around For When Your Money's No Good

This list from Populat Mechanics on Unusual Survival Checklist Staples suggests that one thing you might to keep in your emergency kit is ... beer.  Lots of beer.

Why?  Because in a disaster situation you can use beer in lieu of money.  Pay people in beer to get the supplies or help you need.

I can't argue with that!  Yet another reason to keep up our stock of beer.
No comments: