Snack foods of the day

What happens when you go to the grocery store on a very empty stomach? You come back with a bunch of snack foods that weren't even on sale.

The good news is that the locally-made Sahara Cuisine Cinnamon & Sugar Pita Chips were really, really tasty -- surprisingly, kind of addicting. They were like big thick crackers with just enough sweetness.

The bad news is that the Empire Kosher Frozen Cherry Blintzes, which Foodgoat had been eyeing for weeks, were a disappointment. They were just jelly-filled lumpia. Just fried crepes. They didn't taste bad, but the crepes Foodgoat makes are much better. Plus, there were only two cherries in one whole blintz, which seemed very skimpy to me.
No comments:

Regal condiment of the day 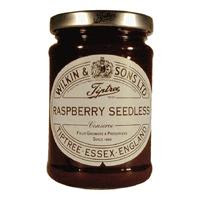 I'll admit it, I was seduced by the British Royal Arms. I ended up buying a jar of Tiptree and Wilkin & Sons Raspberry Seedless jam not only because we were out, but because I was curious (in an embarassingly crass fascinated-with-the-nobility sort of way) how the preferred jam of Her Majesty The Queen, Master of the Household, Elizabeth II stacked up.

Of course, the royal warrant is not necessarily a mark of fine quality. Lea & Perrins, Purveyors of Worchestire Sauce, now that makes sense. Kellogg's, as the Royal Cereal Purveyors, is kind of funny. But the royal warrant kind of lost its luster when I discovered that Coors is the Queen's preferred beer supplier.

Still, the jam was pretty good, though your ordinary Smucker's stuff is still fine by me. Next time I ought to get a really British flavor, like mulberry or quince or greengage (though I don't even know what a greengage is).

The fun part, really, is picturing jolly ole Lizzie dancing around in her jammies, singing "It Must Be Jelly 'Cause Jam Don't Shake Like That" while she's having her morning scone with jam and her bowl of Rice Krispies.
No comments:

Fast food of the day

When Foodgoat brings me a large order of McDonald's french fries out of the blue, it's a good day.

While the McDonald's hamburgers, for some reason, taste much better in the Midwest than they do in California (where, in contrast, Burger King prevails) the french fries and their New Jersey-flavor are tasty everywhere.

I also like to think of my fries as the brains of a crime-fighting team who can shoot lightning bolts from his eyes.
1 comment:

Bottled beverages of the day

Beware: Honest Tea Assam Black bottled iced tea is not sweet. If you expect a Snapple, you'll be disappointed. It tastes like tea. Tea without sugar. It's supposed to taste like that. Foodgoat reports that once you know what to expect, it's kind of refreshing.

In contrast, there's the new, and superfluous, Pepsi Vanilla. I'd heard positive things about it from people who know about these things, but I just think it's awfully sugary (or rather, high fructose corn syrup-y). I only had one taste of Vanilla Coke, but I don't recall being any more impressed I'd be more inclined to pick up Journey's Twisted Bean Vanilla Brew again, which had more of an unexpected spicy kick to it. Or better yet, I'd just spike a regular Coke with as much vanilla syrup as I like. Then I could add a maraschino cherry while I was at it, like at Mel's.
No comments:

We started with black olives and smoked oysters, along with an assortment of canapés, including crab salad, chicken salad, and caviar. For the main course, we had a stuffed filet mignon, accompanied by roasted potatoes and a cucumber salad. And for dessert, a slice of chocolate rum chestnut cake, with spoonful of whipped cream.

No, it's not a fancy uptown bistro, but Foodgoat's grandmother's house the day after she has a dinner party, when we're there to use up the residuals. Pretty lavish leftovers, huh?

I was particularly interested in the caviar canapé, because I've never had caviar before, much less red caviar. Curiousity piqued, I later visited this nifty virtual caviar lineup. Who knew there were different kinds of caviar? I think what we had was trout roe. That's because a) it was salty, b) we're by the Great Lakes, c) it was served with cream cheese, and d) it looks just like the picture.

The high point, however, was definitely the chocolate rum chestnut cake. It was delightful. Foodgoat gets almost dreamy-eyed when he talks about it.
No comments:

Lost food of the day 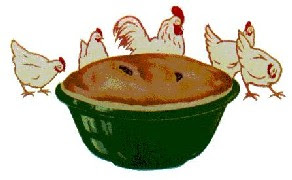 Among the things that were lost to the long hours of an offline fridge was the last serving of a chicken pot pie. I was sad.

The pot pie was the redemption of a failed experiment. Foodgoat thought the truffle honey would be good on chicken, so I attempted a truffle honey-roasted chicken.

Well, it didn't work. It was an adequate roast chicken, but you couldn't taste the honey at all (granted, I couldn't quite bear to use up the entire jar of truffle honey on just one chicken). So, the next week we made a chicken pot pie.

Even though it was full of peas, I was impressed. In truth, it was the cheese biscuit crust that I was enamoured with, and I was mighty impressed that a crust I made actually turned out flaky. Foodgoat thought there was too much butter in it, but I scoff at such a comment. There is no such thing as too much butter or too much cheese. And the crust had both.

Blackout supplies of the day

Last night's freakish incident taught us an important lesson: our emergency food supply is pretty pathetic. We raided the cabinets and all we could dredge up were a bag of dried cranberries, dried mangoes, Prima toast, and some stale graham crackers. Of course this would happen on a day neither of us had lunch.

Undaunted by what turned out to be very limited traffic jams, we hopped our bikes to get salami sandwiches and oranges at Foodgoat's grandmother's house. Later, still hungry, we trooped down to Little Italy's Feast of the Assumption, where a generator-assisted vendor sold us (and a lot of impious-looking hoochie mamas, I might add) Italian sausages. We prepared for the long haul by stocking up on Gilly's doughnuts and a giant chocolate cupcake.

Stilll, it was a narrow miss. So this weekend we're putting together a emergency food kit. Unfortunately, we haven't been able to come up with many things that taste good and don't require heat, water, or special storage. All we came with are nacho chips, salsa, granola bars, Oreos, beef jerky, and cans of baked beans, tuna, and corn.

The next time they need to drain the Eastern seaboard to charge up Dick Cheney's batteries, we'll need to be prepared.
No comments: 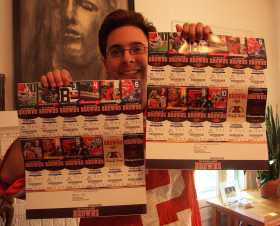 Well friends, our suffering is nearly over. As you can see, football season has arrived (aren't the tickets beautiful?)! It got me thinking about sports and food.

Baseball and food go hand in hand; games are a continuous chow-fest of cuisines of all kinds, from hot dogs to sushi. Heck, the only reason ladygoat ever got into baseball was the roaming hot dog vendor, who yells "Hotttt Doggggggggggg!" and brings a hot dog right to your seat. So I have food to thank for bringing her to a classic American past time.

The only real food in football, on the other hand, comes before the game, at brat & burger tailgating parties.

Could it be that football is just so darn exciting that no one wants to spend a minute away from the action? Or is it that the games are played in below freezing weather?

So how to get ladygoat to like my favorite sport of all time? Football games lack the culinary possibilities of baseball. Now that I think about it, the only food I got at a foodball game was beer or hot chocolate. Granted, that hot chocolate tasted like a million bucks (considering the temperature was in the single digits), but if it's that cold, all the hot chocolate in the world won't help. Hence my problem with football & food: if the games don't revolve around food as in baseball, how to get ladygoat to go to a game?
No comments:

Fake Filipino food of the day

Once in the third grade, I got to bring siopao to school for lunch. One of my classmates took one look at it, and said "What is that?" to which I replied, "Siopao! Duh!" I don't think it occurred to me that my Wonder Bread-eating compatriots would not have known the tastiness that is a pork bun.

Siopao (by the way, that's SHOO-pow), originating in China, is a favorite Filipino food, especially for a merienda. Meaty (usually chicken or pork), saucy middles are encased by a white fluffy bread, and the whole thing is steamed. There's also a dot on top that I've never really understood the purpose of. But in any case, it's delicious. It really, really is.

Turns out that it's not so much filled with pork as with TVP, or Texturized Vegetable Protein. I have nothing against TVP, or any other meat substitute, or vegetarians for that matter (vegans, on the other hand, I just don't get). I even once had a very tasty lasagna using TVP that I couldn't tell the difference with. In the siopao, however, there's not enough meatiness to the middle; it seems like a whole lot of spices and sauce instead of texture and weight. Bleah.
2 comments:

Phillip Morris product of the day

I like cheesecake. I like strawberry. I even like Jell-O pudding snacks. And yet, I'm a little disappointed with Jell-O Cheesecake Snacks. The cheesecake part, made with cream cheese, is just okay. The strawberry jelly stuff on top is too sweet. It could be worse. But the next time there's a sale I'll stick to the chocolate pudding.

(The actual cheesecake from the Food Co-Op that we had the day before yesterday was better, except for a slight tofu taste, especially with the previously-discussed brandied cherries.)
No comments:

Quaint food technique of the day

Three weeks ago, we went where we have never gone before: the world of canning. And we took the pitted cherries with us.

We were heartened, though, by last year's pickling successes and went boldly forward. The usual thing would have been to make jam but why do the usual thing when you can make brandied cherries? Cooking with alcohol is always more of an adventure.

Then came the mysterious canning part. We used small half-pint size jars, because they were the only size that fit in our pot. We sterilized them in boiling water, filled 4 of them up with cherries and the syrup, leaving 0.25" headspace, stirred to release air bubbles, and topped them off with the nifty two piece caps they come with. Using the handy-dandy jar lifter (the only special canning tool we got) we dropped them onto a metal steaming basket on the bottom of our biggest pot of boiling water. After ten minutes, we fished them out and let them cool for several hours. We made sure everything was vacuum sealed, and stowed them away in the back of the cabinet.

It seemed too simple. I checked them every day for mold or some rapidly evolving life form.

After a couple of weeks we decided the cherries had sat long enough. We made a chocolate cake (see the secret recipe), opened up a jar, and put the two together.

Powerful stuff, let me tell you. Not very sweet at all. But no moldy taste or alien eyeballs. I'm amazed: the first Foodgoat canning experiment worked!
No comments: