The day before Independence Day, Foodgoat and I hit Costco, where we saw a couple buying food for 68 adults and 55 kids, a woman with 12 packages of hot dog buns (12 in each), and 3 kids each pushing a fully-loaded cart. We also snagged some free samples, which only made us hungrier, so on our way out, we stopped at the food court. 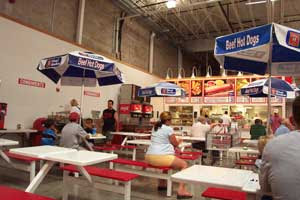 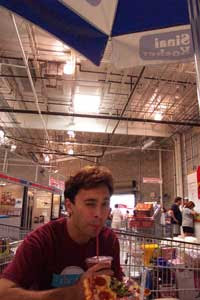 I'm not sure why they put picnic umbrellas up, considering it's all inside. But the food court is surprisingly tasty for something so cheap. We split a slice of pizza ($1.50) while I had a lemonade ($1) and Foodgoat indulged in a thick berry shake ($1.35). Between the food court and the free samples, you could have yourself a satisfying meal.

Yet another reason Costco is one of my favorite stores. Not only can you get things in huge quantities for a good cost, but they practice model labor policies. As a result, their labor costs are half that of Wal-Mart, despite paying much higher wages and providing excellent benefits.

So, it's gratifying to discover that Costco executives have been contributing to Democratic candidates. Howard Dean, Joe Lieberman, John Kerry and John Edwards have received contributions from various company officers. Jeff Brotman, the chairman, not only gave $2000 to the Lieberman campaign, he gave $5000 to Victory Campaign 2004, which calls for an aggressive challenge to the right-wing on the ground and on the air.