I scream! for ice cream!

Last night, I went to the grocery store at 10 o'clock at night just to get ice cream. It was that kind of day. 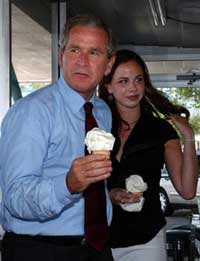 I guess I wasn't the only one who felt like that. President Bush and daughter Barbara picked up some frozen custard on the campaign tour through battleground state Wisconsin.

Maybe he's tipping his hat to dearly departed icon Ronald Reagan, who in 1984 designated July as National Ice Cream month (hat off to the Fodor's Blog for that tip). 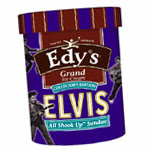 And in honor of another icon, Elvis Presley, Edy's Grand Ice Cream has splashed out two limited-edition flavors: All Shook Up (chocolate ice cream swirled with marshmallow and caramel, with chocolate-covered peanuts added) and Love Me Tender Brownies (vanilla ice cream with fudge and brownie chunks added) (via Pop Culture Junk Mail). This country might be a different place if Richard Nixon had heeded his hilarious request to become an FBI agent.

Really, he can't have been any worse an agent than they apparently think Foodgoat might have been.

I would have liked to see the ice cream-eating Bush with Leon Kass, who he chose to head the President's Council on Bioethics. Why? Because Kass, who is much opposed to all sorts of biotechnology and is very much in the middle of charges that the Bush administration is politicizing science, once wrote ...

"Worst of all from this point of view are those more uncivilized forms of eating, like licking an ice cream cone -- a catlike activity that has been made acceptable in informal America but that still offends those who know eating in public is offensive."