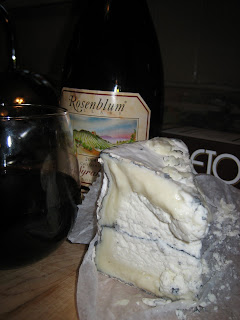 Our cheese budget has been growing lately. Last week we shelled out over $30 at the cheese stand. But what can we do? We try cheeses, we love them, we must have more. The cheese vendor gives us a slice of a new cheese to try, we love it, we must buy half a pound.

That's what happened with the Humboldt Fog, which, according to the cheese guy, is one of the hottest cheeses of the day. Made by Cypress Grove Chevre, the goat cheese was dee-licious, with a tangy, blue cheese-like center surrounded by a more brie-like creaminess. Rich and flavorful, it's definitely a party cheese.

So we bought crackers and had ourselves a party of two.
9 comments:

Idaho? Udaho? Actually, It's the Senator

Foodgoat and I were snickering yesterday over the latest hypocritical denials and disavowals from Senator Larry "I am not gay" Craig regarding his encounter with an undercover policeman in a Minneapolis airport bathroom, when suddenly we remembered why his name was familiar:

Yup, that's the one.

I wonder if the Super Tuber is another one of those secret signals Craig employed?
10 comments:

No Reservations, About Cleveland 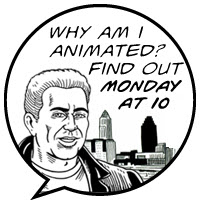 The long awaited episode of No Reservations, where Anthony Bourdain dines in Cleveland, aired last night. It was funny, it was clever, it made Cleveland food, quite rightly, look very tasty.

Even though the West Side Market segment was a wee bit shorter than I would have liked.

And there were a few too many shots of Decrepit Cleveland.

And they didn't go to our two Cleveland favorites, Slyman's and Stevenson's.

And ... Skyline Chili?!? Really? I had to side with Michael Ruhlman here and grimaced at the spaghetti-weak chili-cheese dish. And correct me if I'm wrong, but isn't that more of a Cincinnati thing, and not a Cleveland specialty? And Cincinnati is completely different from Cleveland. One is in Ohi-uh, and the other is in Ohi-oh. See? Not the same city at all.

But we are plotting a visit to the Sausage Shoppe soon.
6 comments:

Today's tip: If you find yourself in need of grated carrots, and the only carrots you have are the baby kind, a rotary grater of the kind normally used for Parmesan cheese lets you grate up the little carrots without putting your finger tips in the line of danger.

Having finally finished the last Harry Potter book, blogging can once again proceed as previously scheduled.

Passing up on the beer cocktails this time, I tried the Ommegang Witte Ale. It's a nice, light, very summer-like beer, that I would drink again.

Except without the orange slice this time, thank you very much. Although I hadn't seen it before, white wheat beers are often served with a slice of orange, though this may be a marketing ploy to promote Blue Moon. In the case of the Ommegange Witte, I didn't care for the addition of orange at all, which made it taste far too citrusy. Actually, it made me feel like I drinking another beer cocktail after all.
2 comments:

Foodgoat and I submitted a question to Wii's Everybody Votes channel, and now it's up there as one of the questions!!!

Get thee to your Wii and vote on "Is it called pop or soda?"

Midwesterner Foodgoat calls it pop. I, the West Coaster, calls it soda. I have to be careful not to ask for sodas from the natives because I end up with seltzer water.
13 comments:

That's apparently what I had at the Flannery's Pub, where Foodgoat and I dinnered before Saturday's preseason Browns game. Specifically, I drank a Snakebite, which is half hard cider, half lager beer.

It sounded nice and light and hot summer day-ish, Harp's and Longbow cider, but it seems my taste for cider, and sweet alcohol in general, has faded. The Snakebite just tasted really sweet, leaving no room for any of the other tastes and flavors that come with beer. It might have been fine if it came in a little cordial glass, along with dessert, but in Flannery's Trademark 20 oz. Imperial Pint,.. no, no, no.

According to wikipedia, a Snakebite might also refer to Guiness and cider, which might also be called a Black & Gold, which is what Foodgoat's mixed beer choice was called, but his Black & Gold was Guiness and Dortmunder Gold lager. His drink was much better than mine, not only because it tasted better, but the two beers separate out into two layers.

The Guiness, surprisingly, was the floating top layer - I thought it would be the sinking bottom layer because it looks and feels heavier, but it seems Guinness is carbonated with a lighter gas mixture of nitrogen and CO2. Who knew?

You know what beverage goes really well with a main course of pork meatballs in a curried cream sauce?

I didn't think it would taste good in general, but it was delicious with the curried pork.

Not sure how it will mesh with, say, pasta, but for Indian flavors, it's yummy.

Speaking of Indian flavors, last week we also made a version of saag paneer using tofu instead of paneer cheese, that turned out surprisingly well. It was an ideal tofu dish, in that you couldn't really tell it was tofu. 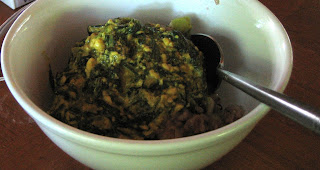