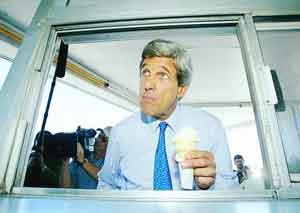 We here at Foodgoat are happy to announce that we officially endorse the John Kerry/John Edwards ticket. Now, now, my Republican readers, don’t feel that we don’t respect your opinions here. Just to show our bipartisanship, we nominate and wholeheartedly support George W. Bush as the new baseball commissioner (which is what he really wants to be anyway). See, now we’re all happy.

Did I sway your vote? Heh, didn't think so. Political debate is usually annoyingly entrenched, contentious and worse, repetitive and boring. But in an election year, damn addicting. So although I'll still be posting about my own food adventures, my contribution to the discussion in the four months leading up to the election is not to bash on Bush (way too easy) or make Kerry look appealing (sometimes not easy enough) but to document the food connections: the culinary positions and gastronomic implications of this election. If any delegates out there want to sneak me into the DNC Convention, heck, I’ll blog the food there too. I'll tell you what the candidates eat, what they don't eat, if they cook, what their policies might mean for eating people everywhere. Got a hot tip on the secret ingredient in the First Lady's signature dish? Let me know and I'll dish it out here first.

After all, you can learn a lot about a person, or a country, through its food.

For example, we start off with the first, and most obvious, bit of election 2004 food trivia ....

This year, buying ketchup is a political act.

Like a lot of people, I have Heinz ketchup in my fridge. Heinz ketchup, the product that launched the considerable fortunes of the Heinz family, the heir of which married Teresa, who, after her husband's death, married John Kerry, my endorsed candidate.

I seriously doubt buying more ketchup makes any difference in how the election goes, but I'll buy more anyway. We're almost out. And anyway, I like their cheeky proposals for new labels.

But if you just can't stand the idea of however tangentially supporting the Democratic candidate, you could now buy W Ketchup: America's Ketchup.