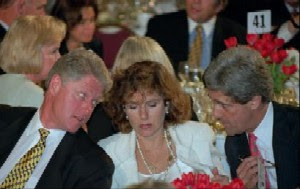 Just out of Project Blog recovery, and right into MSNBC immersion, watching the Democratic National Convention in ole Beantown. Last night FLOTUS candidate Teh-RAY-zuh Heinz(-Kerry) gave a nice endorsement of her husband. We're fond of her, even though she persists in wearing sweaters tied around her shoulders, because she's Absolutely Fabulous, a breezy fresh contrast to Stepford Wife Laura Bush and the usual helmet-hair political wife.

But don't go trying Teresa's recipe for pumpkin spice cookies in the Family Circle Cookie Cook-Off: it's not hers. After some voters complained to her that they didn't like it (even though in taste tests on TV, tasters were evenly divided), she said on NPR yesterday: "I never made pumpkin cookies; I don't like pumpkin spice cookies."

Apparently Teresa had originally submitted a recipe called Yummy Wonders, but the Family Circle test kitchen said it didn't work. When they called her office and asked if there had been a mistake, an aide sent the pumpkin cookie recipe without consulting her.

Mrs. Heinz Kerry is reported to be a good cook, and, as the New York Times helpfully informs us, "good cooks are usually upset when their names are associated with inferior recipes."

This is far from a silly sidenote, for the winning cookie has foretold who would enter the White House since its inception. (The Cookie knows all; the Cookie sees all.)

And if you don't like Our Lady of Ketchup, well, go Cheney yourself.