'Tis the season for giving, and for food bloggers, that means the annual Menu for Hope fundraising campaign. This year, the funds go to the UN World Food Programme, which provides hunger relief for needy people 'round the world.

You have until Friday (Dec. 22) at 6PM PST to donate, and for every $10 you give, you get one raffle ticket toward a prize of your choice. The prize list is phenomenal, ranging from cookbooks to meals to an honorary lamb.

Personally, I have my eye on the gift box of artisan cheeses donated by HeatEatReview.com.
5 comments:

Separated at the Production Plant

The new Lemon Burst flavor of Eclipse gum reminds me something ... what was it? ... 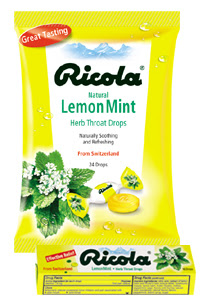 Oh of course! Ricola Lemon Mint cough drops! The overwhelmingly artificial lemon flavor! The nasal clearing effect! The chemical taste that can only be withstood when one is weakened by a viral infection! That's it!
No comments: 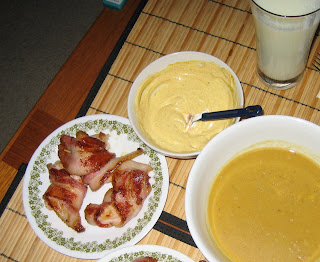 No one actually needed to send us a review copy of the new cookbook, Seduced by Bacon by Joanna Pruess. If there is one topic that would actually get Foodgoat to read a cookbook, bacon is it. But it was an effective gesture anyway, since here I am posting about how we tried one of the many delectable recipes features the finest of fine foods.

While I tried to get Foodgoat to try the Peanut Butter and Bacon sandwich, the recipe we actually tried was the bacon wrapped shrimp with curry mayonnaise. It sounds like one of those foolproof recipes, does it not?, in which every single ingredient is delicious. What can go wrong?

Nothing, in my opinion. It was in fact yummy. But for Foodgoat, it was something of a miss. Why?

Texture. The bacon around the shrimp was ever so slightly ... floppy. I don't think it was the recipe's fault. But for Foodgoat, floppy bacon is a no-no. Had I had this dish with a bowl of hot white sticky rice, it would have been perfect.

Me, on the other hand, prefer floppy bacon to fried to a crisp bacon.
5 comments:

Brussel Sprouts, You're Off Notice 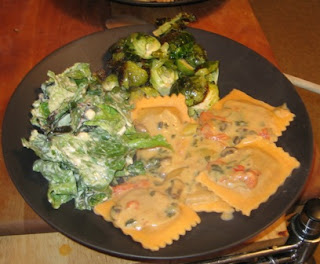 A while ago, I banned brussel sprouts. I had tried a few recipes, and they never tasted good. So when someone mentioned that they loved roasted brussel sprouts to the point of scouring three different grocery stores in search of frozen brussel sprouts, I was dubious.

But I am nothing if not forgiving, so I gave the mini-cabbages another try. I picked up fresh brussel sprouts from the West Side Market (from the Old Man in the OSU hat), chopped them in half, sprinkled them with olive oil, salt, and pepper, and popped them in the hot oven.

It is truly a testament to the roasting process that it can even make brussel sprouts, indeed, taste yummy. The bitterness is muted by a roasted sweetness, making this previously unloved vegetable actually tasty.
8 comments:

More Food TV, where you least expect it

These seem to be fine days for television. Well, except for that idiot boxing episode on Battlestar Galactica (let's face it, there hasn't been a good boxing episode on TV since "Ya gots to believe, Bolie!" on the Twilight Zone). Recently I have become enamored with Bones and Heroes and the Lost Room, for example.

Alas, I have no food shows cued up on Tivo. Not even Alton Brown seems that interesting anymore.

I did, however, enjoy watching Dirty Jobs, which often features the messier, ickier, and smellier sides of the food chain. The recent episode at Ohio’s Put-in-Bay Harbor with a snake researcher featured the host learning to puke a water snake, resulting in the snake's fish dinner coming back up partially digested. That episode is ranks right up there in hilarity with the one where he visits a Las Vegas pig farmer who feeds his pigs leftover scraps from casino restaurants.
1 comment:

I covet this T-shirt, spotted today on dooce: 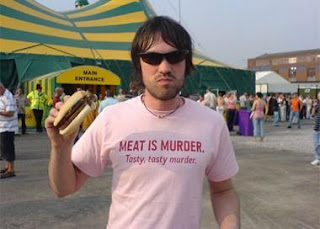 The Red Onion of Courage 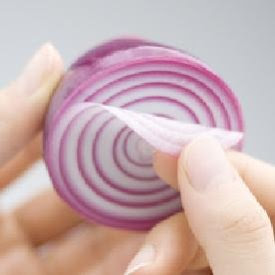 This post-it note pad is designed to look, and feel, like a red onion. It's brilliant.

Lately, red onions have been the preferred onions except, of course the The Onion). Why settle for a mild, meek onion, when you can have a bright, colorful, tangy onion?

I have been especially been taken with raw red onion in my salads. Conducting my very own Personal Food Challenge, I have been adding increasing amounts of red onion at the salad bar to my plate every day, eating them until I reach my saturation point. This point is reached when I experience what I call The Burn -- when all my nasal passages have been suffused with onion air.
No comments:

We watched an excellent and informative food show on TV the other night, and typically, it wasn't on the Food Network.

And that is how we finally learned ...

why some pistacios are dyed red (in other countries, the nuts are harvested after having fallen on the ground, and the red dye is used to hide blemishes that result) ...

why the pistachios are split (the ripened nut pushes on the shell)...

how the pistachio industry came to the U.S. (credit my new hero William E. Whitehouse, who went to Persia, now Iran, for six months in 1929 and came out with 20 pounds of pistachio seeds) ...

Now 98% of the U.S. pistachio crop comes from California.

See how fun that was, Food Network? Now you try.
3 comments:

What should the 4th, and lightest, hors d’oeuvres be?

On the one hand, I've never had a mango spring roll, while prosciutto with melon - well, no one can mess that up. On the other ... mangoes are gooooood.
4 comments:

I left my heart at the sushi station

While in San Francisco, my family accompanied me to Monster Park, where we had a tasting with the caterer (the caterer is owned by the same company that owns the 49ers, I guess). When the caterer said "tasting," I assumed that meant small, bite-size samples, but what we got a full spread of almost everything on the initial menu. I left very, very full.

The one thing they didn't have at the tasting was the sushi station. Here's the initial sushi menu:

We wanted things for both the sushi lovers (unagi) and the sushi neophytes (California rolls).

Ladygoat to Foodgoat: How does this sound to you?
1 comment:

I left my heart in the Hooter's of San Francisco

Before I settled on a reception site, I considered practically every restaurant in San Francisco. The restaurant business being what it is, a lot of these places weren't there when I last lived in the area. One sounded especially promising -- Mas Sake, a Japanese sushi place, that seemed reasonably priced, stylish, and in the Marina.

And then I looked online for user reviews, and found comments like this:

Hey, don't you think there are way too many white people in here for this to be a good Japanese restaura -- whoa, boobs.


Cross that one off my list of potential reception sites.

Although Foodgoat may have just circled it on his list of potential bachelor party sites.
No comments: