The Naked Green Machine smoothie: Yes, it's green. Really green. And it contains things like spirulina and chlorella that sound a lot like diseases to me. But it mostly tastes like apple juice and I feel very detoxified after drinking it.
No comments:

It's February. It's cold. It's gloomy. Not a holiday in sight (I didn't even get President's Day off). It's still cold. Billy died. And the digital camera still doesn't work.

Invite a vegetarian over for
tea. Politely inquire about his degenerate lifestyle in order to lull
him into a false sense of security. When he lowers his guard, beat him
to death with a sack of phone books.

Cook vegetarian over
medium heat until brown. Remove from heat and stir in pasta sauce,
onion, garlic powder, basil, and oregano. Return to low heat to simmer.
Cook, drain, and rinse noodles. In a baking dish, layer in noodles,
sauce, and cheese. Bake covered with foil at 375 degrees Fahrenheit for
30 minutes or until top layer of cheese is bubbling. Let cool for 10
minutes, then serve and enjoy.

Afterward, discreetly dispose of the vegetarian's belongings and wipe down the house from top to bottom.

Why, hello, I don't think we've met before ...
Why, I'm espresso. I'm in every coffee shop you've been in.
No, that's a bitter, harsh drink. That's not you. You're strong but smooth. And what a delicious crema you have on ....

On Monday night, Foodgoat & I trekked over to the Phoenix Coffee roastery for their Brew Matters seminar. We pulled into a dark, hidden parking lot, rang a shrill doorbell on an nondescript building, and walked into ... ahhhhhhh. Smells so yummy! We were walked through the roastery, which was just a room with bags and bags of coffee beans, enveloped by the delightful aromas of roasted coffee and freshly brewed coffee. Mmmm!

Phoenix Coffee is owned by the same guy who started the Arabica Coffeehouses in Cleveland 30 years ago. This is more import to Foodgoat, for whom the Coventry Arabica looms large as an icon of his youth. He still mourns the closing of the Coventry cafe and overall decline of Arabica since its acquisition by new owners.

Anyway, armed with an espresso cup, a bottle of water, and a helpful guidebook to 5 different coffee brewing methods, we went around the room to try Columbian coffee brewed 5 different ways by Phoenix baristas. First up, the French press, the method we use at home, and still the best way to brew coffee in my opinion - it's not only very easy, but a breeze to clean up and you're quite able to control all the variables. One thing that did surprise me - the amount of coffee he used. It looked like a full half a cup - quite a bit more than what we use, which is quite a bit more than what other people usally use.

Next was the Neopolitan style, which I'd never heard, and which I'm unlikely to ever try a home, as it seemed complicated, messy, and while it was strong and fine, it didn't taste all that much different from other methods. Something that requires flipping a container of boiling water is not something I need to try, considering I routinely trip on things that aren't there.

Then there was the stovetop espresso, which inspired the above passage. I know I've had straight-up espresso before, but it never impressed as this one did. Usually if I get an espresso drink, it's eased in with milk and chocolate, but this method didn't need any of that. The barista made a crema with a spoonful of sugar, and that added a lovely touch of sweetness that made it even more delicious. Now I must to get one of those stovetop things.

Next was the pressure brewed espresso, from the steam-making machines such as they have at coffee shops these days. Instead of pouring out samples, they gave us a bare drop to taste using a tiny straw. Considering that there were only 4 of us in the group, they could have poured some out so we could really taste it, but whatever. Still, I did learn that the machine requires a certain level of artistry, which might further explain why the coffee made at the coffee stand at work stinks.

On to automatic drip brewed coffee, where we learned about the golden cup, and more importantly, got to tour the roastery. Of great interest to me: the garbage can full of roasted coffee bean shell, which they just chuck, and yet is still perfectly good for composting and mulching.

Last but not least ... the vacuum pot, which wins the prize for the method that is the most fun to watch (and used to great comic effect by Kate Hepburn in Woman of the Year). Foodgoat and I agreed: WE NEED THIS, if only for when company comes over.

Overall, a fun experience in which I learned a lot. None of the Phoenix's are conveniently located to me, especially since the one in University Circle closed, but Phoenix employees clearly know what they are doing (at least with coffee ... I've been mightily disappointed in their bubble tea though), so I'll certainly head there much sooner than I would to Starbuck's.
No comments:

How much do I love french fries?

But definitely not this much.

And with these, the deplorable Jeremy Scott has ruined, ruined!, my appetite for either pizza or pastries.

Choosing the most atrocious out of his collection was tough. Thanks to the Consumerist for the link!
No comments:

T-shirts that speak to us 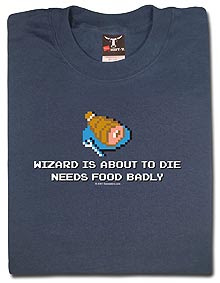 It's 5 o'clock, and Foodgoat needs to put on this T-shirt.
No comments: 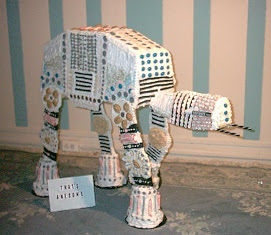 AT-AT stands for All-Terrain Armored Transport? Did not know that.

From what I do know of gingerbread structures, that frosting is probably strong enough to repel any IED. Which is why I think they should assemby-line these gingerbread AT-ATs, SuperSize them, and deploy them to the warfront. Not only will GI Joe be safely esconced high off the ground, but the terrorists would be like, "Damn, I'm hungry and the gingerbread part looks tasty ... eh, forget blowing it up, I'll just nibble on it when they're not looking." And we can be like, "Dude, you guys can just have that AT-AT leg. Command Center just sent us two shipments of left AT-AT gingerbread legs and one shipment of right AT-AT gingerbread legs. Frakkin' Halliburton."
No comments:

I don't get it 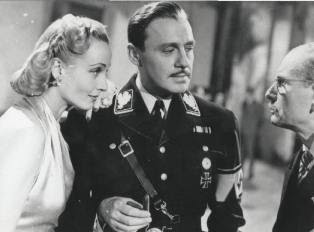 We've discovered a new favorite movie: Ernst Lubitsch's To Be or Not to Be (thanks as always to TCM. ), a 1942 satire of the German occupation of Poland. (For some reason, that sounds bad, but trust me, it's hysterical.)

There's a key joke in the movie, though, that I just don't get.

They named a brandy after Napoleon, they made a herring out of Bismarck, and the Fuhrer is going to end up as a piece of cheese!

Can someone explain it to me?
No comments:

Foodgoat & I finally ventured into Jack's Deli, a longstanding family-owned "corned beef haven" just down the street, and which always seems full (even on an early weekday night). Jack's reminded me of the little deli we went to in Las Vegas, which was meant to remind me of traditional, old-style New York neighborhood deli. The menu was huge and filled with odd (at least to me) dishes like chopped liver, gelite fish, and bagels for dinner.

And lots of corned beef. To Foodgoat's chagrin, corned beef to me is crumbly and comes out of a can. He'd like to banish the image of my family and I happily eating a big dish of canned corn beef and cabbage right in front of him, but it's burned into his brain for eternity.

But what really surprised me at Jack's was my drink. I ordered a Chocolate Phosphate because I had never heard of it and because I wanted to order a drink that sounds like it belongs in a chemistry lab.

I got a soda glass filled with dark brown liquid and bubbles on top that resembled the surface of the brain. Mmm!

A phosphate is a carbonated drink, made from carbonated soda water, flavored syrups and phosphoric acid, an ingredient still used today in many brands of soda (or pop, if you really insist on calling it that). Soda jerks kept the phosphate in a shaker bottle (like hot sauce or worchestershire) and added a few drops to each drink.

The first sip: freaky bizarre. A little too bubbly. I felt like chocolate powder and water was going up my nose, and that's not tasty.

The second sip: better. Like watery chocolate milk, without the creamy taste and texture of milk. The chocolate powder still didn't feel fully mixed in though.

The third sip: Foodgoat suggested putting in the ice that the waitress left for it. I dropped it in, swirled it around and sipped. A ha! Much better. Chocolatey! Refreshing! Phosphatey!

The conclusion: I like chocolate, but I'm not so fond of the chocolate phosphate. Not so much because of the taste, though, but the texture. But chocolate to me should be rich and creamy, not watery and bubbly. In the phosphate, chocolate just doesn't match.
13 comments:

The City of Jell-O

Did the Bay Bridge ever look so lovely as when it is made of Jell-O?

I've been meaning to post about Liz Hickok's accurate (though not life-size) recreation of the entire city of San Francisco in Jell-O, but I have been hoping that somehow we would get to see it in it's entirety, rather than the bits and pieces on her portfolio. What we need is a Google Jell-O San Francisco that works in the zoom-in zoom-out vein of Google Earth.