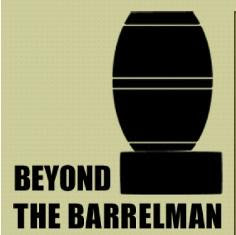 Yippee! (Or is it "yippy!?") My mom & sister are flying in tonight! Tomorrow we're off to Chicago for the closing reception for Beyond the Barrelman, an exhibit of Filipino art in which my sister has two paintings.

While we're there, we won't lack for food to sample: right outside the hotel we'll be fighting it out with the crowds at the Taste of Chicago festival, featuring more than 70 restaurants.

At long last, the Quest has ended, and that which has long been sought has truly been found.

Yes, we have finally discovered the Best Burger in Cleveland.

The significance cannot be overstated. You would think that something to quench the burgerlust would be a dime a dozen in such an American city, but no. We've come across burgers aplenty, but never found the burger that truly satisfies that deep-seated yearning that occasionally seizes upon Foodgoat. For the burger must not merely be tasty, it must also encapsulate the full essence of burger-ness, which is more than a food. The Burger, for example, cannot cost $10. Any whiff of yuppieness and the burger essence is lost. The menu should be small and centered around burgers. The clientele should be neighborly. And of course, the burger should be delicious.

The archetype of the Burger is Nation's, but Nation's is many miles away, and we had nearly given up hope of finding anything like it here.

And then one of Foodgoat's co-workers (to whom we shall be forever grateful) pointed us to Stevenson's. 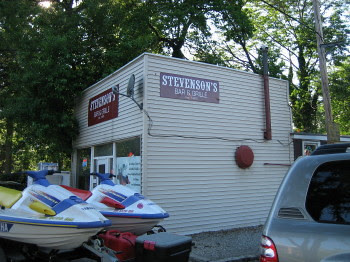 Stevenson's Bar and Grille is a tiny, scruffy place (on Lakeshore in Euclid), with a long dark bar along the kitchen, so you can see your burger being made. 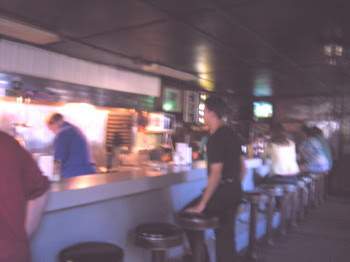 The Burger Maker is meticulous, taking extraordinary care in making the burgers, and it shows. The bacon was slow-cooked, the crisp fries were freshly-made, and the bun was toasted. He was also a character, which adds another check mark in the Good Burger Joint evaluation.

Foodgoat was, shall we say, happy about the result. He's got the Big Guy, which has a tartar sauce. 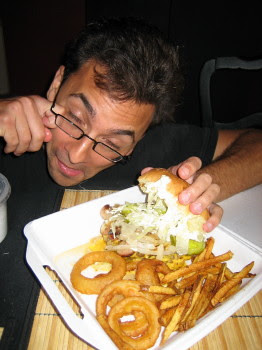 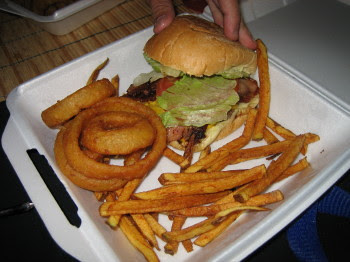 And indeed, the payoff was dreamy. 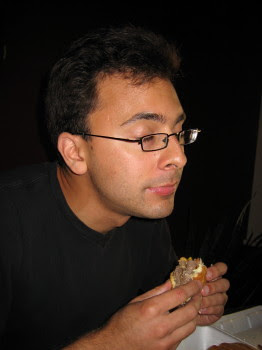 Of course, we can't confirm that it's really that good unless we try it again. So in the interest of public service, we'll have to go back. Again and again.
No comments:

At a super-secret meeting in an undisclosed location, an anonymous source from the inside circle of the Grandmother adminstration and her accomplice leaked information on making the infamous chestnut-rum cake to Foodgoat.

These spy-plane photos clearly show that it involves mixing (of unknown ingredients), flattening with a rolling instrument, and rolling in a creamy middle. 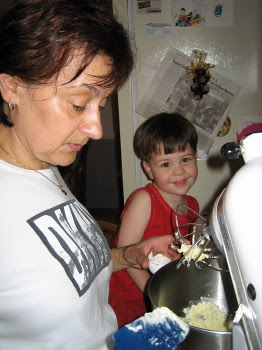 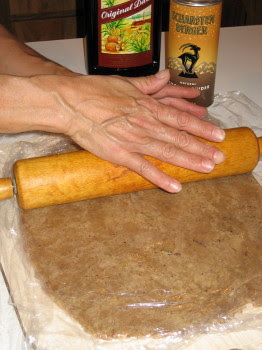 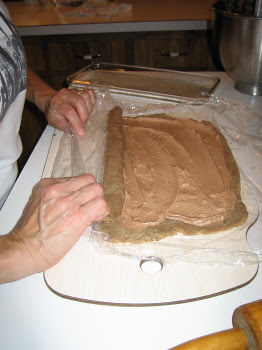 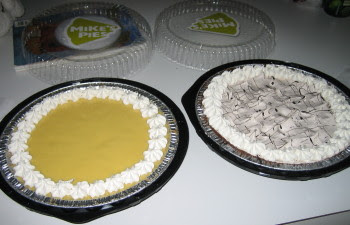 Mmm, pies. Foodgoat will take a pie any day over a cake, but has yet to find a really good pie here in Cleveland. So of course he couldn't pass up a stop at Mike's Pies while in Tampa. They sat patiently in the fridge, that chocolate cream pie and key lime pie, as patiently as Foodgoat, awaiting evening.

But whilst he was in another room (on the phone processing the just-seen Revenge of the Sith with pals! it couldn't wait!), others apparently thought they had waited long enough. 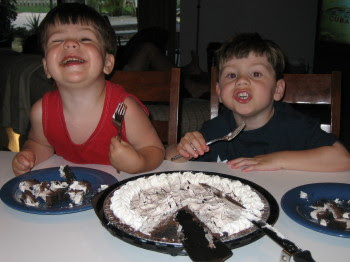 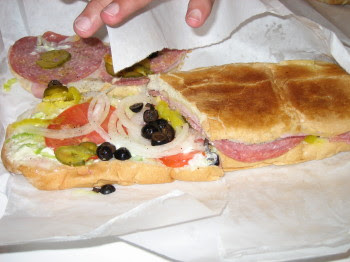 While in Tampa, Foodgoat partook of a local favorite, the Cuban specialty. Since I was not able to partake myself, this will have to be a forensic analysis.

-The subject seems to have been squashed by some sort of heavy, blunt (possibly hot) object. Very promising.

-Bread appears soft and sauce-absorbant on the inside, crisp on the outside. Seems adequately thick for maintaining structural integrity.

-Sliced onions appear to be yellow or white. Red onions are typically preferred, but impact here is inconclusive.

-Unclear as to type of meat present. Salami is likely, based on flat circular shape, but this investigator's training in cured meats is limited.

-Presence of several black olives indicative of a serious problem for this investigator, though other investigators may contradict that assessment.

Conclusion: Uncertain. The bread and the characteristic squashing are very suggestive, but there are olives present. In addition, there are no obvious cheeses nor bacon, one or the other of which are usually required for official categorization as Tasty Sandwich.

EDITED TO ADD information from an eyewitness at the scene: the Cuban sandwich was made at, and purchased from, an unconventional source, namely, a gas station. An Exxon gas station of questionable quality. Fortunately, the eyewitness and sandwich consumer suffered no ill effects.
No comments: 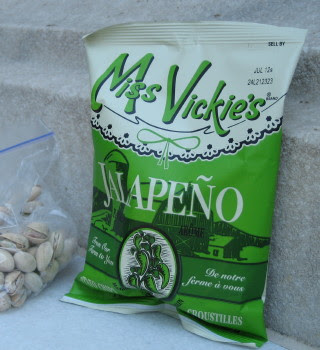 It looked so quaint, so rustic: bags of Miss Vickie's Jalapeno Croustilles (potato chips) piled in a big galvanized tub. But the tub is the cafeteria at work, not a country store in the outbacks of Canada, and Miss Vickie's is a Frito-Lay brand now, not a Quebec regional.

Well, there goes that. But maybe it still tastes quaint and rustic? Ah, no. I wanted to like it, if that makes you feel better, Miss Vickie Marketing Department. A little spicy, and leeettle hot. Not terrible. But still, well, boring. Sort of flat, if that makes sense for something that's all spiced up. I'll take the pistachios.
No comments:

Hey, that was my idea!

What a good idea! So good I believe I came up with it a long time ago. Tryout Tuesdays sound familiar to anyone?
No comments: 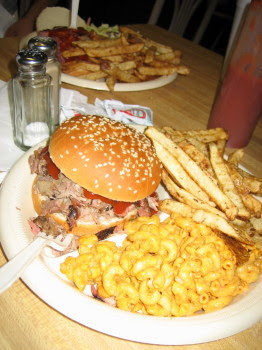 I mentioned last week that Foodgoat discovered the excellence that is First Choice Southern Bar-B-Que in Tampa last month, but I neglected to post the proof.
No comments: 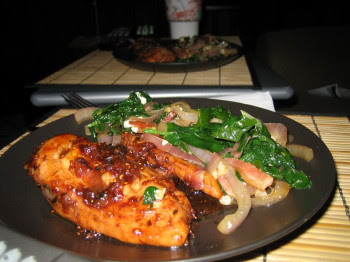 The only thought I have, looking at this photo of the raspberry-balsamic chicken and bleu cheese and bacon spinach that I made the other day, is that it was 83 humid degrees inside the house that day, and cooking that dinner almost killed me.
No comments: 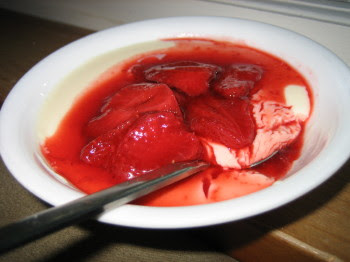 Vanilla pudding,
Tastes remarkably like cheesecake,
Without the springform pan.
No comments: 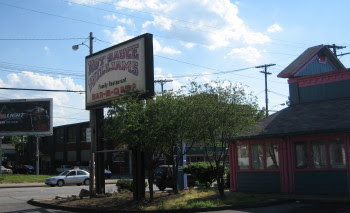 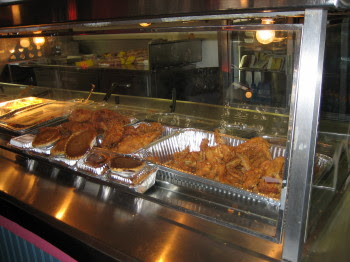 This is not a bad thing. Maybe barbeque sauce is supposed to be on the sweet side? It was tasty, nonetheless. It doesn't hold up to Foodgoat's recent Tampa discovery, First Choice Southern Bar-B-Que, when people carried out barbeque in 15-lb orders, but that's the South. Here in Cleveland, I am pleased to find any barbeque at all. 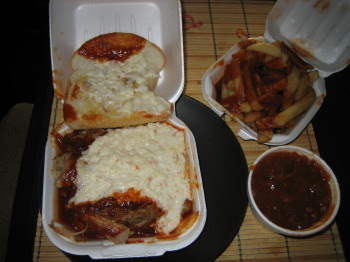 Foodgoat, but of course, got a pulled pork sandwich, slathered not only with sauce but also with coleslaw. 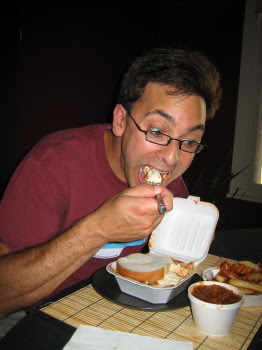 Which he had to eat with a fork. Is it still a sandwich if you need utinsils? 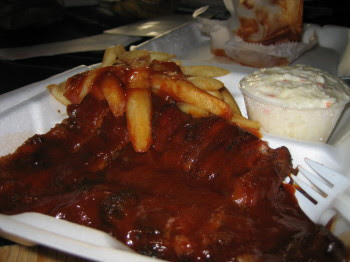 I went with ribs. Big, messy, chewy, ribs. But it was the fries - fat, crispy on the outside, fluffy on the inside, potato fries - that hit it off with the barbeque sauce. It reminded me of how as a kid I used to get the chicken McNuggets barbeque sauce for my fries. Such a natural pair. Unlike the Tom Cruise and Katie Holmes thing.
No comments:

Reading Between the Lines 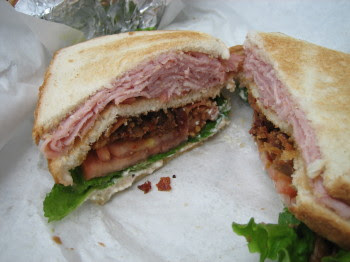 Note to self: When Foodgoat says "I would be very surprised if you finished the whole sandwich," he might not mean "I challenge you and your puny girl stomach to consume this massive mound of ham and bacon - which I can take down with one eye closed! - you weakling!"

And if that is what he means, perhaps it's not such a good to eat it all anyway.
No comments:

Can someone explain to me why one muffin tin makes proper blueberry muffins that look like this: 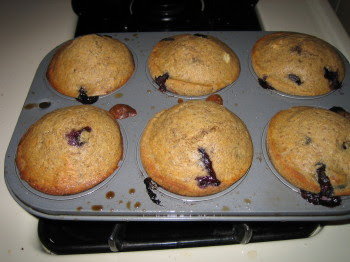 While another muffin tin, with the same batter and put in the oven at the same time, makes blueberry muffins that look like this? 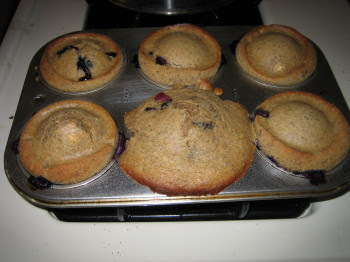 (All the blueberries have sunk to the muffin bottoms, an unfortunate consequence of physics that I have yet to resolve.)
I'd also like to put a shout out to my homie Pam cooking spray, which makes all the easy sliding out of muffins possible. And if I knew what the opposite of a shout out was, I'd do it for those paper cup liner things, which are supposed to be easier but always end up creating a bigger mess.
No comments:

On the rare occasions when I go to the grocery store these, I am suddenly overwhelmed by all the packaging. So many things to read! So many pretty colors! So many wrappers that make crinkly sounds! And on sale!

And that is how I ended with a Luna bar. 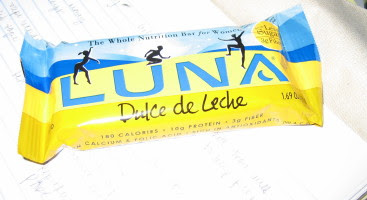 Luna bars are nutrition bars for women. Why women need their own nutrition bar, I don't know. What would happen if men ate Luna bars, one shudders to think. The last gendered food product I ate (the instant Quaker oatmeal made just for women!) was - how shall I put it? - vile and nauseating, but I want to try anything Dulce de Leche flavored. 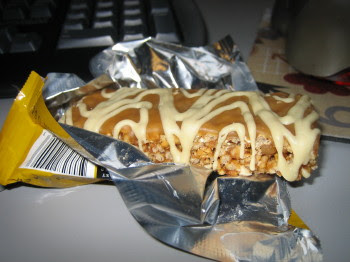 It turned out to be a layer of frosting and caramel over a granola bar. Practically a candy bar, as I've discovered most granola bars are. Not bad-tasting, but nothing to wave tauntingly in the face of the men-folk. And I don't feel especially womanly. I suppose it's back to watching Oprah to get in touch with my feminine side.
No comments: 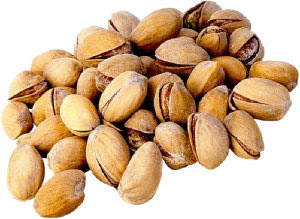 Last night I ate 1/8 of a pistachio and I didn't die. I guess I'm not allergic!

Foodgoat has been plowing through pistachios like they're going out of style. Red pistachios and not-red pistachios. Is there a difference? Our reliable sources at Wikipedia says no, but maybe this time I don't believe them.

In unrelated news, I might have continued with my scholarly ambitions if I could have done my ethnographic fieldwork with the Wookies.
No comments: