For those of you stargazers, the kind that cares about Kirsten Dumpst and started reading about the Kabbalah, I give you a celebrity fair trade endorsement: Chris Martin. Who? Chris Martin. You know, the guy from Coldplay ... the band. You KNOW, the guy married to Gwyneth Paltrow. The one who let his kid be named Apple. 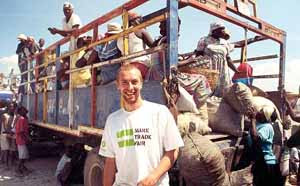 Okay, so maybe he's not exactly E! True Hollywoord Story material ... yet. But, the guy has gone and spent a week in Haiti with Oxfam to promote the Make Trade Fair Campaign. Here, check out his diary of the experience. Considering that he could be spending his time in VIP clubs or getting colonic cleanses, I grudgingly give him props.

Best quote: "I felt like a fourth-rate Bono. Later on I felt like a third-rate Bono, and hopefully it'll escalate until I feel like a full-on Bono."