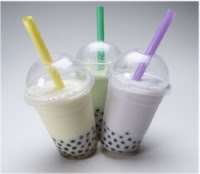 Once upon a time, many ages ago (last summer), Ladygoat visited her family in the faraway land of Cal-i-fornia. Her kind-hearted brother and sister, who pitied the Ladygoat for her banishment to Cleve-Land, gave her to drink a mysterious concoction. It was called Pearl Tea, though others spoke of it in hushed voices as Bubble Tea, or Boba Tea, or Milk Tea. The drink was plentiful in their land, it flowed from many trendy shops and Asian restaurants alongside juice bars and coffeehouses, and Ladygoat was enchanted, for the drink was refreshing and fun and used giant straws.

But when Ladygoat returned to Cleve-Land, there was no Bubble Tea to be found, though she yearned for more. She attempted to make it herself, but despite many efforts and the use of a pre-assempted kit, the results were unsatisfactory and un-tasty.

But one day, word came to her that there was indeed one place in the kingdom that offered the tasty drink, as well as various auto parts. Ladygoat summoned them to her but alas, they do not deliver. So she set out, along with her guide the Foodgoat, to seek out this strange shop, this TurboFour: Sport Compact Parts and Cafe.

After many trials and tribulations, and at least 10 minutes of driving, they finally came to 3030 Superior Avenue on a Saturday morning. But a powerful wizard must have hidden the entrance, for they could see the sign but no way to go in! Fear not, our heroes bravely walked around to the back parking lot on E.31st and discovered the True Path.

Inside, a wise man concocted the precious drinks -- a Coffee Mocha, and a Purple Delight (taro-flavored). They waited anxiously; Ladygoat considered a spoiler for her Honda Civic while Foodgoat contemplated a biohazard sticker for his VW Jetta. They offered the wise man the keys to the kingdom but he really only wanted $5.

And so at long last, their long quest was completed and their thirst quenched: the bubble tea was cool and sweet, and the black tapioca balls chewy and filling.
No comments:

I never met a sweet potato I didn't like
Summertime, when the living is easy and the cooking is hot. Too hot. Which makes the cooking not so easy. With the temperature close to 90 degrees, turning on the oven or the gas range, even for a little while, makes the kitchen pretty much unbearable. So I've been scouting out recipes for the handy-dandy slow-cookin' Crock Pot, poring over Judith Finlayson's Delicious and Dependable Slow Cooker Recipes. As it turns out, the first recipe we tried was a big winner. Simple, tasty, and I suspect, even healthy. Definitely will be worth repeat showings.

Soak 2 dried New Mexico chili peppers in boiling water for half an hour. Drain, discarding the water and the stems. Pat dry and chop up.

Heat 1 T. of oil over medium heat. Add 2 finely chopped onions and cook until softened. Add 4 minced garlic cloves, 1 chopped jalapeno pepper, 1 tsp of salt, 1 tsp of dried oregano, and the New Mexico chilis. Cook for 1 minute and dump it all into the slow cooker, along with 4 cups of peeled and cubed sweet potatoes and 6 cups of chicken broth.

Cover and cook on low for 8 to 10 hours, until sweet potatoes are tender. Puree the soup with your ever-useful immersion blender. Add 2 cups of frozen corn kernels and the zest and juice of one lime. Cover and cook on high for 20 minutes. In the meantime, have a frosty root beer and sit in another room under a ceiling fan (optional).

When ready to serve, garnish with strips of roasted red peppers and chopped cilantro, and crumble in cold corn muffins.
No comments:

Never too early for chocolate
There's something subversive and somewhat decadent about sneaking chocolate into breakfast. Not like hot chocolate or chocolate milk. Something where chocolate doesn't really belong at all, like bagels or pancakes. Unfortunately, the rumor is that Bruegger's no longer makes the yummy chocolate chip bagels, and pancakes, even the ordinary kind, is more mess and effort than I can dredge up on workday morning. But, I can eat banana-chocolate chip muffins, made the Sunday before, right out of the fridge. A chocolate muffin is practically a cupcake and therefore more of a dessert, but a banana-chocolate chip muffin has fruit in it, so you can justify the breakfast status.

Preheat oven to 350°F. Line twelve muffin cups with foil muffin liners (and don't believe those foil liners that claim you just have plop them onto a baking sheet -- they hold up fine, but the bottoms get overbaked). Mix 1.5 cups all purpose flour, half a cup of sugar, 1.5 teaspoons baking powder and 1/4 teaspoon salt in large bowl. Mix about a cup of mashed bananas (I used three, so I think it ended up being more), 1 egg, 1 stick of melted butter and 1/4 cup of milk in a medium bowl. Stir banana mixture into dry ingredients just until blended (do not overmix). Stir in 3/4 cup of chocolate chips.

Divide batter among muffin cups, filling each about 3/4 full. Bake muffins until tops are pale golden and a toothpick inserted into center comes out with some melted chocolate attached but no crumbs, about 32 minutes.
No comments:

Where did Foodgoat go? and the Rhubarb Adventure

A) The state of Florida, B) A state of extended blogging laziness, or C) Both, but they're back now.

Answer: C. Yeah, it's been slow, but kitchen experiments are picking up steam again.

On Saturday, on impulse, I bought fresh rhubarb at the market. I'd never had rhubarb. I'd never even been entirely sure what rhubarb was (I had the vague notion that it was a British thing, like gooseberries). I now know that rhubarb looks like celery, except it's red. I further know that it's very bitter and sour when raw and that it is usually used as a fruit (in pies and with berries and things). But did you know that in 1657 dried rhubarb root (used medicinally) sold for over twice the price of opium?

Anyway, we made rhubarb crisp, taking the recipe from Epicurious. It was exceptionally easy and quick for a dessert, and despite some apprehension, I found that it tasted pretty good. Cooked up with sugar, rhubarb acquires a nice sweet and sour taste with little indication that it's a kind of celery. Definitely interesting, at least. Another kitchen experiment success.