He's the son of a mill worker, you know

John Edwards, whom a Southern maternity nurse tipsy on moonshine will recognize as the twin brother of John Ritter she misplaced all those years ago, wants you and America to know that, why shucks, ma'am, he's just a hard-workin' Carolina boy at heart.

But he's also a millionaire trial lawyer, so we look to the food evidence.

Exhibit A: He and his wife, also a lawyer, celebrate their wedding anniversay every year with dinner at ... Wendy's. Jay Leno's take: "That should be his platform, any guy who can convince his wife to go to Wendy's every year should be elected. Imagine what he could convince the leaders of other countries to do."

Exhibit B: When Don Imus quizzed Edwards on the price of milk, he got it right.

Exhibit D: When asked whether he had been eating well on the campaign trail, he said "No,I had two double cheeseburgers for lunch today." (I think that qualifies as "yes," but that's just me.)

No evidence of caviar shampoo or anything like that. Circumstantial, maybe. I tried to find a smoking-gun picture of Edwards digging into a bag of Cheetos. I didn't find one. 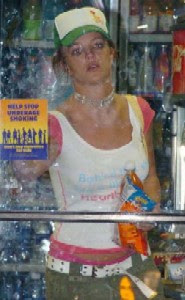 I found one of Britney, though.

The verdict? You decide!