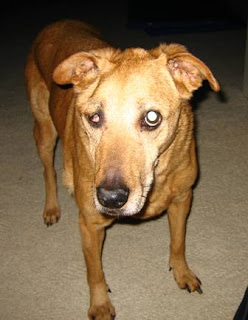 The dog Biscuitgoat is the subject of a plot!

I don't want to sound paranoid, but lately I've realized there are people who are out there to get me. I'm serious. There are those who are actually hovering around, calling, planning, plotting my death. Don't think I don't know what you're talking about.

All just because I'm an old dog. Okay, a really old dog. And I can't get around quite as quickly as I used to. And part of my head is sunken in, causing one eye to dry out requiring regular applications of Visine. And I might be a little scrambled, as evidenced by that one night that I got into the spare bedroom, shut the door, got into the narrow gap between the corner wall and the bed and stood there for who-knows-how-long until someone happened to wake up at 3 am to find me in stuck facing the corner of the room and unable to move because I can't possibly back straight up.

The conspirators will say it's for my own good, it's to relieve my suffering. You want to alleviate my suffering? GIVE ME MORE HAM.

It's not that I'm afraid of death, you understand: I've seen the Twilight Zone episode, and I know I'll be let into heaven. What I don't know is whether there will be any ham in heaven, or any meat products at all ... after all, it would seem antithetical to have slaughterhouses in the holiest of all planes of existence. And yet it wouldn't be a place of complete bliss and delight if we all had to eat vegan.

So, just to be on the safe side, I'm getting all the ham I can get while the getting is good. Just today I had three different kinds of ham and felt much better for it. So even though even I must admit that my death may come sooner rather than later, DON'T RUSH ME. There's still ham to live for.
4 comments:

A Dog Responds to the Food Prices

The dog Biscuitgoat has not only taken over the blog, she's taking letters from readers.

My dog Max has become a fan of yours, so I was hoping you could use your influence to help me out. With the economy being what it is, we've had to scale back on our spending, and I've switched Max over to another, cheaper brand of dog food. Now Max is mad at me and has gone on a hunger strike. Can you please explain to him the realities of today's food prices?

Yours, Cheap Pack in Chesapeake

Times are indeed tight. And alas, being the lowest members of the pack, it is always the poor fate of us dogs to be affected first when conditions change. It's always our stuff that gets skimped on first. We don't get new toys. We get groomed by amateurs. They cancel our subscription to Dog Fancy.

But dogs are understanding, and we could take all this, without complaint, if that's what it takes to keep the pack together. It's a little harder to take crappy, stale, tasteless, probably poisoned with industrial chemicals from China, dog food. Maybe all dog food looks the same to you, but I assure, it is not. There is some brands of dog food that I have starved rather than eaten, and then there are some brands that buy their ingredients from unregulated and possibly contaminated Chinese sources. Remember that pet food recall less than a year ago?

Fortunately, my pack feeds me Bil-Jac, a local pet food company that uses only fresh, quality real meat and chicken from local producers. It's really quite delicious - in fact all the dogs that visit try to eat my food. Because I have managed to look particularly sad and pathetic lately, they have not only fed me the dry Bil-Jac, but the frozen Bil-Jac, which is so fresh that you have keep it in the fridge. Which is really good.

In other words, some things are worth paying more for. Cheap food, including cheap dog food, are cheap for a reason, and sometimes comes at a serious cost later on.

Dogs are not especially picky eaters (I myself will eat many things my pack considers absolutely inedible) so if Max isn't eating, you can bet that dog food is probably all kinds of nasty. I say find other ways to cut back and pay for some acceptable dog food. Plus, I suspect Max is also mad because he's the only one being asked to sacrifice. Are you still getting fancy double tall fancy mochas in this age of uncertainty? (And don't tell me you deserve the treat because of all your stress. Puh-leeze. You don't know stress until you've been chased around the house by a Dyson vacuum cleaner attempting to suck up your soul.) Still going on big vacations (which you don't take us along to)? Then consider budgeting there instead.

Anyway, good dog food is not that much more expensive. What the current economic crunch should teach you is not to cut back indiscriminately, but that one should prioritize their money and focus on what's really important. For me, that would be tasty, healthy food.
1 comment:

I thought we were a happy pack. I did. Sure, we had our occasional disagreements - did I have to come in right now? you don't want that last piece of bagel do you? - but all in all, I was content and I thought they were content as well. Sure they left all day long, but they always came back eventually.

And then one night they came later than usual. They did this sometimes. Maybe they worked late. I didn't think anything of it. But then ... I got a whiff of something. Something different. Something like ... ham. Really good ham.

I looked more closely. They were dressed particularly well. They seemed suspiciously pleased with themselves. And yes, on closer smelling, it was definitely the scent of ham. Expensive ham.

I tried to ask them where they'd been. As usual, they wouldn't tell me. I pretended that nothing was amiss, but I suspected something. Maybe it was nothing. I should trust them. I wanted to trust them ... but I had to know for sure. So I'm not proud of it, but I looked at their cell phone records. And that's where I found the pictures. Incriminating pictures that left no doubt about what they had done.

They had spent the evening with some Lolita. 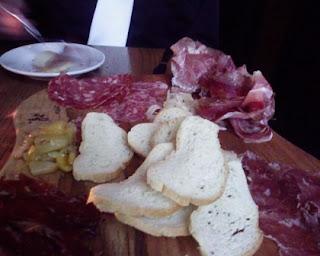 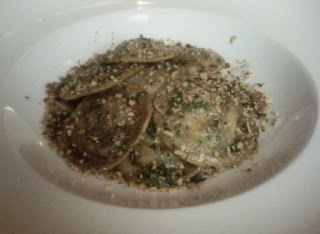 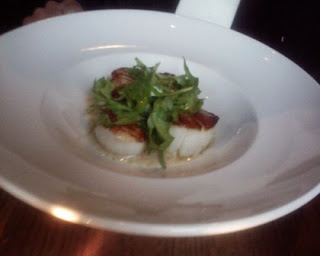 I should have left it alone, but I had to know more - all the sordid details. So I listened in on their little private conversations they have between the two of them.

Ladygoat's butternut squash ravioli was delicious, but paled in comparison to Foodgoat's sea scallops, which were tender and luscious and flavorful. They went wonderfully with a side of rich creamy polenta. Even the bread sticks - much like big soft pretzels - were very good.

But the highlight of the evening was starting with the "Big Board for Two", a sampler of cured meats that included salami (made in house), sopressata, and three different kinds of prosciutto, along with pickled fennel and a sweet apple salsa-like thing. Served on a wooden cutting board, it was like a sushi plate, but of meat - each item was bite-sized, flavor-packed, and perfectly complementary in flavor.

The prosciutto was made by La Quercia Artisan Cured Meats in Iowa, and while the Berkshire prosciutto and the spicy prosciutto picante were absolutely tasty, it was the smoked prosciutto, the Speck Americano, that blew them away. Smoked with applewood, this prosciutto was not just good - it was memorably good. It had a yumminess that was on a whole other scale of measurement. Slightly sweet, slightly smoky, complex and just really tasty.

You should have heard them go on and on, the shameless hussies. They know perfectly well how much I adore ham, how much I love prosciutto. And they go off and eat prosciutto - the very best prosciutto - without me.

It was of little consolation to find that they had never been there before, that it was their first time. They had planned it, you see, they had planned it for a long time. And they were planning on going again. Without me. Just because the food was delicious, the prices reasonable, and service impeccable.
4 comments: