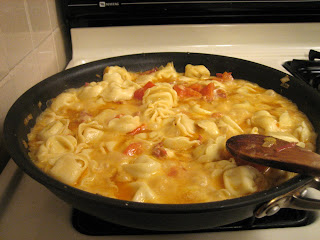 The four defining qualities of a tasty Foodgoat dish:
Check, check, check, and check ... it's a good meal!

Today is Foodgoat's birthday! And he was buried at home under two feet of snow, just like when he was 4 and no one could come to his birthday party.

For his birthday, he got all the equipment and supplies needed to brew his very own dortmunder beer! 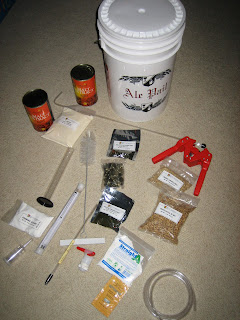 Right now all the tubes and various ingredients are a mystery to us, but beer making adventures await us! 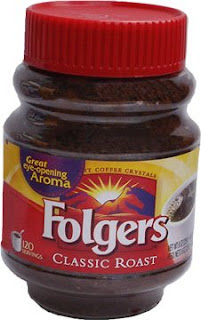 How to partially salvage a cup of instant coffee: spike it with brandy.

Drink coffee from a thermos or a coffee maker that has been insufficiently rinsed after being cleaned, thereby resulting in coffee with a soapy aftertaste.

Filipino Dessert in an Italian Deli

Over the holidays, while shopping at the local Italian deli, I was surprised to come across this particular treat: 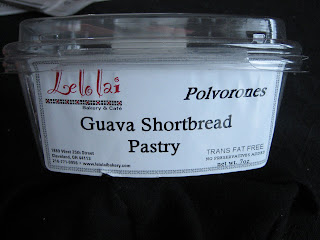 Polvorones? Like polvoron? As in the flour butter powdered milk confection that I love so much?

What is a Filipino dessert doing in an Italian deli in Cleveland?

It was made by a local Spanish bakery, the Lelolai Bakery and Cafe, which is located right next to the West Side Market. As soon as this freezing cold weather and GoatSpawn moods permit us, I'm heading right over the next time we hit the market to stock up on more polvorones.

Because their polvorones was delicious. A little less buttery than the one I make, a little firmer, and also with a dollop of gellified guava or mango for added sweetness and crunch, the Lelolai polvorones were a yummy holiday treat. I bought and enjoyed several packages.

Alas, Foodgoat did not get to enjoy nearly so many, because he is lacksidaisical in his treat dipping while I am, shall we say, intent and focused where particularly tasty sweets are concerned.

But I did not want him to miss out on all the goodness, so for each box I left the last piece for him. 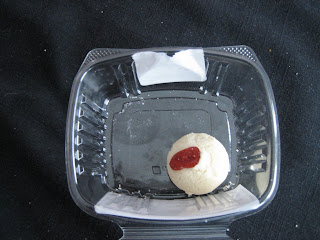 Ever since Foodgoat got a meatball sub at Valentino's and found it DIVINE, his desire for another meatball sub has only grown.

And then one day, it suddenly occurred to him that he could make his own. 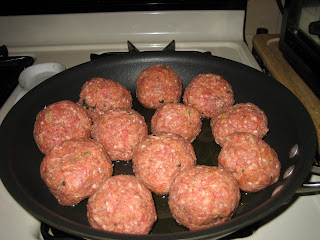 After frying them in olive oil, he then roasted them at 350 degrees for 30 minutes. They went into a pot with marinara sauce for a while. Sub sandwich buns were then loaded with Parmesan cheese and mozzarella cheese, with meatballs and sauce and then wrapped in foil and put in the oven for a while.

It was surprisingly easy to do and came out delicious - even better than Valentino's, if you ask me. Of course, it's not pretty, but often, the best tasting food isn't. 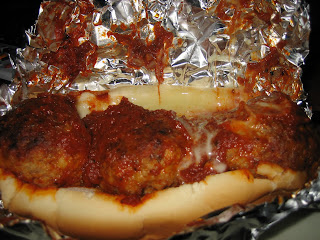 Last Saturday was GoatSpawn's first snow day, and we were stuck inside the house, surrounded by a foot of snow. It was time for some warm, baking goodness, but our oven stopped working sometime around Thanksgiving, so warm baking goodness would have to come from the bread machine.
I was checking out the King Arthur Flour website for bread machine recipes, when Foodgoat spotted this photo for the Sweet Pull-Apart Bread, and said "We have to make that": 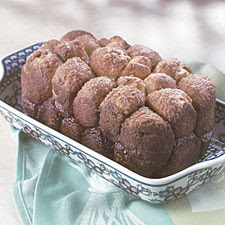 So, inspired by the photo, we embarked on making the sweet pull-apart bread, also known as monkey bread.

First, you use the dough only setting on the machine to make the sweet dough.

All ingredients go into the machine in the order your machine described. Check the consistency after 10 minutes of kneading to make sure it's smooth and soft and adjust as needed (which you should do anytime you make anything in the bread machine).

Next, put the dough onto a flour covered surface and cut it into 32 pieces. 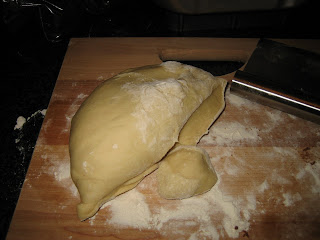 Next, the yummy topping ... 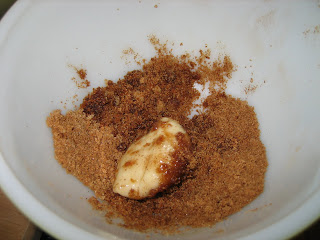 Dip each dough ball into the butter, then roll in the cinnamon sugar mix. 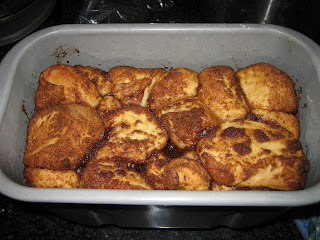 Layer the balls back into the bread machine. Allow them to rise for about an hour, then bake in the bread machine for 65 minutes with the light crust. (I accidentally used the medium crust, and it turned out a bit too dry on the crust.) 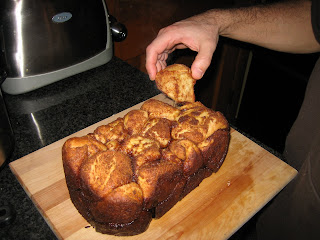 Voila! Monkey bread! What you end up with very much like cinnamon rolls - pieces of warm, sweet, a little sticky bread that you just pull off the loaf. It was YUMMY.

Not only that, but we could also talk about monkey balls for days. 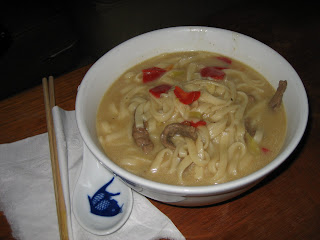 On a very cold winter day, a bowl of hot, spicy noodles is a very delicious thing.

After making the soup, Foodgoat felt there was something missing. It was spicy and tasty and yet still somehow incomplete.

A ha! A spoonful of miso and a half can of coconut milk made a world of difference - adding some depth and balancing out the spice just right.

I had always heard that warm milk will help you sleep. The claim is that milk, like turkey, contains tryptophan, the sleep-inducing amino acid.

But researchers find that eating protein-rich foods, including milk, can decrease the ability of tryptophan to enter the brain, which would be necessary to have any effect on sleep. So it's unlikely that the tryptophan in milk has an sleepy side effects. Does this mean the ability of warm milk to lull you to sleep is just an old wives' tale? 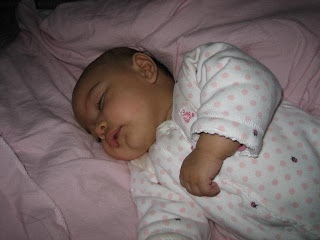 Observing how GoatSpawn likes to have a little nip of milk before nodding off for a nap, even when she isn't hungry, I suspect that the idea of warm milk before bed works, not on some biological basis, but on a warm, fuzzy memory of being nursed to sleep as a baby.
5 comments:

Of All the Things to Buy Online 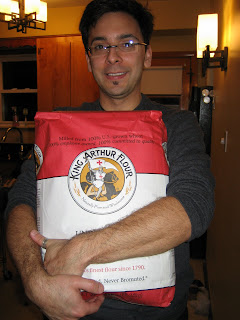 We had a lot of things shipped to our house over the holidays, but the silliest thing to get delivered was this 25 pound bag of flour from King Arthur Flour. We just couldn't resist the free shipping day they had a few weeks ago, considering that it's our favorite brand and Foodgoat with his dumplings goes through flour in no time.

The sad thing is that it didn't occur to me to also stock up on bread flour for use in the bread machine, so last week I had to run up to the store for even more flour. 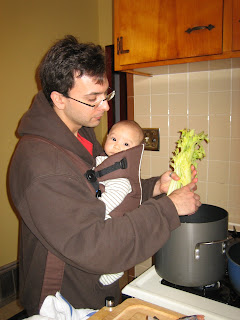 It is Foodgoat's goal to have GoatSpawn grow up helping him cook. With a little extra care and a Baby Bjorn, Foodgoat is introducing the now 13-week old GoatSpawn to the art of making chicken broth. 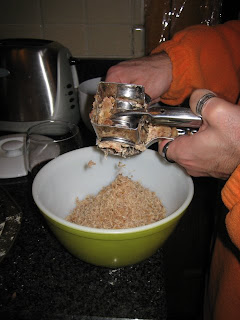 Even though the ratio of good to bad chestnuts following the braising was disappointing, we were still left with a bowl of enough tasty chestnut meat to work with. The next step: grinding up the chestnuts, using a rotary cheese grater, which I thought was a clever use of what I thought was a unitasker tool. 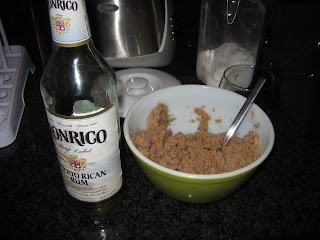 Foodgoat then added rum and sugar, to taste. Foodgoat recommends not too much rum, otherwise it just tastes like rum, but of course, it's hard to hold back where rum is concerned. As Foodgoat discovered this time, when he did in fact just a bit too much rum. 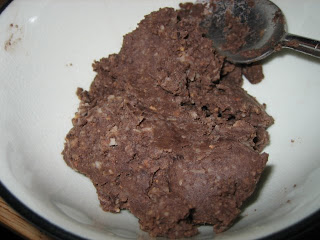 And there you have it! Chestnut rum puree. But wait, something is missing ... 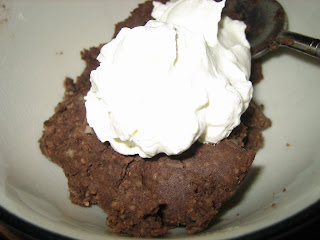 The verdict - delicious. Not quite as good as his grandmother's torte version, but delicious nonetheless.

Lessons in Chestnuts: If It Looks Like A Brain, It's Good 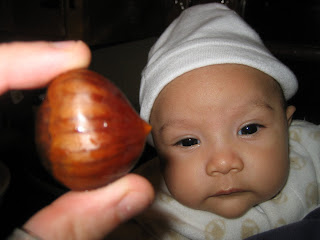 Foodgoat doesn't usually go in much for desserts ... except when it comes to his grandmother's chestnut rum puree. When made into a torte or eaten straight up with a scoop of whipped cream, the chestnut puree is a delicious yet not too sweet treat and a Foodgoat favorite.

We have just heard rumors about the difficulty and labor involved in cooking fresh chestnuts, so when we came upon a technique of cooking chestnuts using a slow cooker, one of Foodgoat's favorite and most used small appliance, and then found piles of fresh chestnuts at the local grocery store, we decided it was time for a new Foodgoat adventure.

First, we picked up about 3 lbs of chestnuts. We introduced them to GoatSpawn, who was not particularly interested. 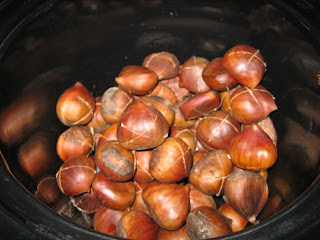 Next, with a sharp heavy knife, Foodgoat scored the rounded side of each chestnut about halfway through. In they went into the slow cooker, with enough boiling water to cover them. Turn the slow cooker on high for 2.5 to 5 hours, until the skins peel back. 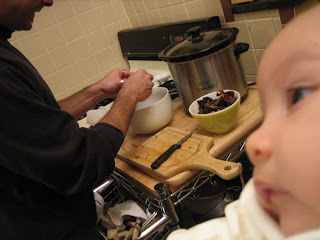 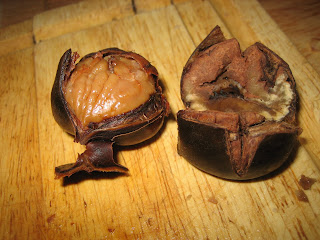 Once done, Foodgoat excitely took a knife and cut a still very hot chestnut in half, peeled the outer shell and inner skin away, and popped the highly anticipated meat into his mouth. Unfortunately, it turned out to be a moldy one. A moldy, gross-tasting chestnut.

Having never purchased chestnuts before, we weren't sure if that 30% failure rate was par for the chestnut course, or a reflection on the poor produce standards at the grocery store. But either way, it almost wasn't worth it. Almost. Because the fresh chestnut did taste very good.