The Goatling is just now recovering from a few weeks of sickness, and in that time, I have accumulated a massive sleep debt.  Seriously, I'm tired.  So tired I'm contemplating another cup of coffee, except that would mean buying ... Starbucks.  And that battle between my exhaustion and my tastebuds is using up the last functioning brain cell left for rational thought, so all I can really do right now is point you to some interesting links.

Skipping Around the Internets, and What the Heck, a Baby Picture 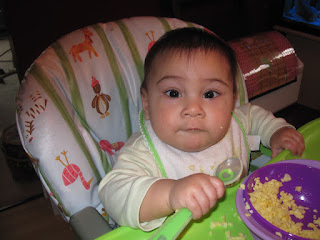 I waffled for a long time about whether to buy a box of 101 cookie cutters, but I'm glad I got them.  Not only have they been used to make cookies, but also to make sandwich shapes, and now, mini-pizzas.

Granola: What Took Me So Long?

I love granola.  It's true, it's an oatmeal raisin cookie as cereal.  Crunchy!  Sweet!  Sticky!  Nutty!  Filling!  Good for you!  What's not to love?

Well, one, it's often a bit pricy, and two, and more of a problem, the increased paranoia of peanut or cashew or pecan exposure.  Granola mixes come in a wide variety of styles and ingredients, and even when I obsessively scan the ingredient list, I'm always nervous about cross-contamination.  It kind of takes away from the enjoyment of eating when, in the back of your mind, you're a little worried about DEATH.

So, for a long time, I've been thinking I should just make my own granola, so I can chug my granola with the peace of mind knowing that no rogue nut is lurking inside.

But I put it off.  Most recipes called for what seemed like massive amounts of oats and a dizzying array of dried fruit.  I never could remember to pick up unsweetened coconut.  I had the wrong type of oats.  I was nervous.

The other day, I figured I'd give it a try anyway to see what happened.  I started with a recipe but changed everything, to go with what I had in the kitchen.  Quick oats instead of rolled oats.  No nuts at all.  Honey instead of maple syrup.  Olive oil instead of canola. Just raisins instead of a selection of four other kinds of dried fruit.  Small batch to mitigate any potential losses.  So my very simple recipe was just this:

Mixed.  Spread on a baking sheet.  Toasted in a 300 degree oven for 30 minutes (stirred every ten minutes). 1/2 cup of raisins stirred in afterwards. 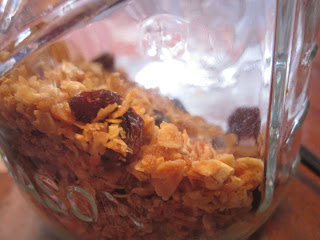 It made just a little jar, that lasted about a day, but having gotten over my fear of granola recipes, I am excited to make more.  Especially now that I know that granola can be fairly forgiving as far as adaptation, additions, and subtractions are concerned.
No comments:

There was a time when we would have done anything to get more calories, any calories, into the Princess Goat.  This was when she developed a taste for Coke, chocolate-covered raisins, and lollipops.

That's why, in keeping with that goal, I thought it would be a great idea to make egg butter.

Egg butter (aka munavoi) is a dish made in Finland, especially in the region of Karelia (which is right next to Russia).  It's a popular spread made of eggs and butter (duh) that traditionally goes on top of Karelian pies, but also on top of breads.  It seemed appropriately fatty and caloric.

It's so easy to make it hardly warrants description.  Two hard-boiled eggs.  Two tablespoons of melted butter.  Smoosh into a spreadable consistency.


We use eggs and butter a lot, even together, but for some reason just eggs and butter alone on bread seems kind of  ... weird.  Foodgoat refused to even try it.  Princess Goat ate it as a sandwich, but wasn't particularly impressed and seems to prefer a plain hard-boiled egg.
No comments: