what this blog is good for 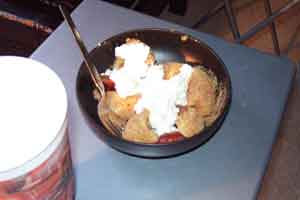 ... is not only reminding Foodgoat that he hasn't made plum dumplings in almost a year, but reminding him exactly how the recipe goes, which helps a lot when you've forgotten it.

We meant to make them for the IMBB? Dumpling parade, but never quite managed to get it together. When we finally did, Foodgoat realized why he doesn't make it that often -- it's a lot of freakin' work.

But sooooo goooood though.