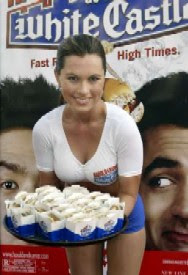 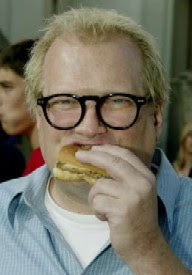 Yes, I still kind of want to see Harold and Kumar go to White Castle, which opened a few days ago and had the infamous sliders at its premiere (with Drew Carey as Surfer Ken). Do I not stand in solidarity with my Asian peeps? Do I not, when the moon is full, also hear the midnight siren song of mediocre fast food? Do I not have, somewhere inside me, a pot-head slacker as well?

Um, actually, no, I don't. Perhaps I don't want to be all that inclusive.

But I might have seen it already had it been titled "Harold and Kumar Go to Krispy Kreme." (We have been known to drool all over the window between us and Great Machine, where as I've eaten at White Castle exactly ... once.) And it might have been a one big glazed donut commerical too, according to Gene Expression, had not Krispy Kreme turned down the chance at free product placement. He finds it very ironic that White Castle jumped on it:

Back in the 20's when White Castle(WC) started, hamburger meat was considered disgusting, something that only the very poor would consume. This was because of the ease of bacterial infection and the prevalence of other animals worked into the food. Cheap food stands like WC were also suspect because of the sanitary practices of the staff. So WC had to build an image. To do so they took two words; White (implying clean and wholesome) and Castle (implying strong and safe), and the stands took off. They also took great strides to build/maintain this image, making their staff and stands appear impeccably clean and cooking the food where the customers could see.

Now, in 2004, WC has associated itself with a movie that includes such "unwholesome" activities as; pot smoking, sex, and sexual perversion …

Such dissonance is not lost on the company. Sez White Castle:

We thought the values were very inclusive in terms of the actors being Korean-American and Indian-American. As for the other...things (drugs, sex, etc.) that take place, well, they're not White Castle values - but from our point of view, we saw it as authentic with the lengths our customers will go to get our burgers.

Drug policy isn't much of an issue in this election, nor could I find photos of any of the candidates in a pot-induced feeding frenzy (and if I did do you think I'd show it here? Heck no, I'd be over selling my soul to the National Enquirer), but here's the most detailed comparison of where they stand that I could find.