The proof is in the photo-op 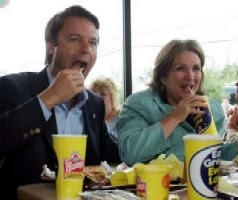 As they do every year, John and Elizabeth Edwards celebrate their anniversary at Wendy's ... except this year they did it with the presidential candidate, his wife, and dozens of news crews.

Elizabeth ordered a Classic Combo Single, John got the same but with cheese, and they split a Frosty. Teresa Heinz Kerry, whom we suspect does not celebrate any occasion at a fast food joint, pointed at a picture of chili on the menu and asked the cashier what it was before ordering a bowl. John Kerry had the same, along with a chocolate Frosty (that’s what my mom always orders from Wendy’s!). Teresa told reporters later that it was surprisingly good. "It's good chili," she announced. "It could even be made by Heinz." 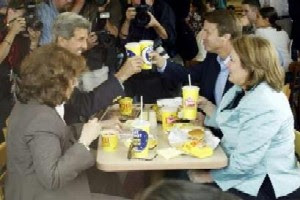 Kerry paid the bill, and the Democratic presidential ticket sat down in one of those vinyl booths.

Also present were Cate Edwards, who was asked by her mother to fetch napkins. She and Vanessa Kerry sat at a separate table with the omnipresent Ben Affleck. Way more cool than eating with the ‘rents. They sipped drinks while Affleck had a double hamburger.

Inspired by this, Foodgoat and I also hit Wendy’s for dinner on Saturday, Foodgoat for one of the new Bacon Mushroom Melt and I for a Jr. Bacon Cheeseburger. That 99-cent menu is pretty spiffy. No one cared to document this for the media, however.