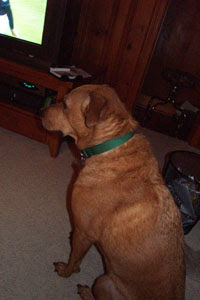 All these years, it was believed that Sienna, our houseguest was but a baseborn mutt, a dog of undistinguished and humble origins.

But then Foodgoat's sharp-eyed SIL spotted a picture of a Ridgeback, and the mysteries of Sienna's more purebred lineage began to be revealed. It is now believed that Sienna is in fact a noble Rhodesian Ridgeback, also known as the African lion hound. The Rhodesian Ridgeback is a South African dog used by Dutch settlers most famously to hunt lions. Ridgebacks could locate and hold the lion at bay so the hunter could get close enough to get in a shot.

Ridgebacks are natural guard dogs, notorious counter surfers and "kings of dozing", and look just like her, so the Sienna-as-ridgeback theory is looking pretty good.

But the hallmark of this breed is the ridge of hair which runs backwards along the spine, which Sienna lacks. About 10% of ridgebacks are born without this important identifying characteristic. So we speculate that poor Sienna was abandoned by an unscrupulous Rhodesian Ridgeback breeder for not being up to code, which is how she ended up in the pound, where Foodgoat's bro picked her out.

No word, however, on whether it's a breed characteristic to absolutely love strong Danish bleu cheese, or whether that's just Sienna.