No one knows its here, do they?

No one knows its here, do they? 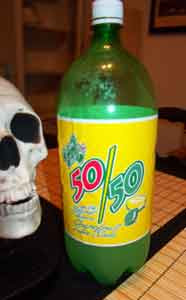 Soda pop brands are pretty much standardized. Where ever you might be in the country, you can get the same old stuff. Right?

Well, turns out some sodas are still region-specific. Case in point: 50/50. It's a grapefruit and lime soda, and like stadium mustard, it seems to be a Cleveland-only product. I've seen the club soda made by the beverage company Cotton Club, headquartered in Cleveland until it was bought out by Cadbury's, elsewhere, but I'd never even heard of their 50/50. Foodgoat knew about it, and it's in all the grocery stores, but I can't even find it on the Internet, that's how obscurely local it is.

It's too bad, because I like it. Normally I think grapefruit is awful, but mixed with lime and sugar and bubbly water in the 50/50, it's rather refreshing. It's right up there with Sierra Mist as my carbonated beverage of choice.