I had Very Good Plans for Saturday.

I would wake up early and whip up a cake from scratch. The cake would be dropped off to the Bake Sale for Democracy fundraiser. I was going make an election cake, an old American recipe that commemorated election day, thereby using my baking skills for the Forces of Good. Then I'd swing over to the West Side Market as we always do on Saturdays, and have a bit of lunch. Afterwards I would go to a French Connection Winetasting and become a Knowledgable Gourmet. Finally, I would write a scintillating post about my delicious cake for Is My Blog Burning? while doing my laundry. I felt very organized.

It didn't quite work out that way.

Having been up until 3 am on Friday night at Foodgoat's Firmary show (it went well, except that he broke a string in the middle of the set), I didn't get up until 10 on Saturday. Hmm, no time to make a cake ... I'll just do it after my wine class. So to the market I went and then off to wine tasting, which was a lot of fun. Back home at 3 pm, I resolved to make a cake. But being just a teensy bit woozy from tasting 8 different wines, I decided to lie on the couch (just for a minute) and watch some TV.

Around 6 pm, I finally came to.

I could have made the cake then, but I was tired and melancholy from the wine (translation: hungover). And the bake sale was over. We watched the Passion of Christ instead.

So. I was going to write off Is My Blog Burning?, since today we had lunch plans and I was anxiously awaiting an afternoon book signing with Eric Schlosser, author of Fast Food Nation. Besides, I had forgotten to get the ingredients for the election cake.

But around 5 o'clock, I was flipping through The Book Lover's Cookbook, which has recipes inspired by celebrated works of literature, and came across a recipe for cake from Anne of Green Gables. In the book (one of my favorites of all time), Anne prepares a cake for her favorite teacher, who is coming over to dinner. What she doesn't realize, until it's too late, is that where she should have used vanilla extract, she uses liniment. Disaster, naturally, results.

The best part is that the recipe is from a granddaughter of L.M. Montgomery, the Anne of Green Gables author. The second best part is that I had all the ingredients and it didn't seem too hard. So I went to work, and made my very first cake from scratch. 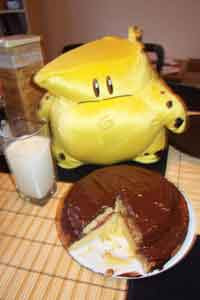 Preheat oven to 350. Combine dry ingredients and mix. Add butter and milk and mix well. Add eggs and vanilla and beat for about 3 minutes. Pour the batter into two greased and floured 9-inch cake pans. Bake for about 25-30 minutes until toothpick comes out clean. Cool for 10 minutes and remove from pans.

Unfortunately, I only have one cake pan. So I used a pie pan for the second on. Also I didn't have any cream for making frosting. So I slathered on red raspberry preserves between the layers. Then Foodgoat had the idea of pouring chocolate on top, so we melted some chocolate and went to town.

The result was surprisingly good, considering that the recipe was pretty simple. The batter, according to Foodgoat, tasted like crepes. The finished cake tasted like .... a cake! Okay, yellow cake to be more precise. Nothing fancy or too adventurous, but that's not always a bad thing. Foodgoat had two slices. So I guess it all worked out in the end.