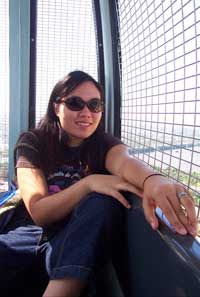 My sister turns 24 today. Why, it seems like only yesterday that I was forcing her to wear her baby blanket on her head so she would look one of the Russian Jew peasants on “Fiddler on the Roof.” You know, for my own amusement. Who knew she’d end up a tortured, starving artist (see her work all over the Firmary site)?

Anyway, here are some food facts about her:

-Favorite food = California rolls
-Least favorite food = Brussels sprouts
-Fave ice cream = Cookies ‘n Cream (any brand), or Haagen Daz Bailey’s
-Fave Food Network personality = Rachael Ray and the Iron Chef host (the guy who eats the bell pepper)
- Fave restaurant = There was this one restaurant in Rome, on a cliff looking across a valley, with waterfalls on the other side .. and it was on ruins, so it was all medieval … Otherwise, I still like El Burro
-Fave cuisine = Mexican or Thai. Thai’s a new thing.
-One food you’d want on a desert island = Ice cream
-Worst food memory = One time when I was small, I was peeling an orange and I found a worm in it
-Odd food habits = After I’m finished with my plate, I draw pictures in the sauce. And I don’t eat the ends of things. Like the end of the bread or the hot dog. Sometimes even the fries.

UPDATE: Congratulations to Carol for selling her first painting!!!