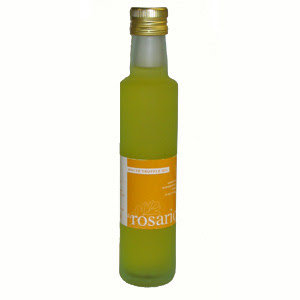 Truffles, like foie gras and viable Cleveland Browns quarterbacks, are the stuff of rumor - much discussed, much hyped, but never personally encountered. We did try a truffle infused honey once, but it was very ... earthy, and earthy and sweet honey make for an odd combination that I just did not know what to do with. So when I saw a bottle of da Rosario White Truffle Oil, I snapped it up. White truffle oil seemed to be all the rage in the expensive coffee table cookbooks - surely we would now know what makes truffles so beloved and sought after.

Alas, much like the Browns' season, the white truffle oil was a major disappointment. Foodgoat took one taste, declared it dreadful, and hasn't touched it since. Anthony Bourdain ridiculed truffle oil as the "ketchup of the middle class," and after sampling it myself, I too am mystified as to why it seems to be used in every restaurant menu item besides the French fries.

And so, after months of sitting, untouched, on our shelf, this weekend I will ceremoniously dump the oh-so-trendy white truffle oil. Don't worry, it will go out gloriously, if not tastefully. I'm going to use it in the very popular backyard Does It Burn? game.