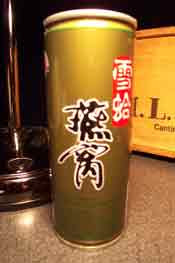 I mean besides the nest of a bird, smart ass. Because it's the second main ingredient, after hashima (we don't know what that is either, but one thing at a time) in this pretty little canned beverage that Foodgoat picked up at the Asian market. I have this vague recollection that birds use spit to keep their nests together, and now he refuses to drink it.

All the recipes with leeks (the giant and fancy-pants version of green onions) say to use only the white and pale green part, which leaves a whole lotta leek left over. What, are they poisonous or something?

3. Why is it illegal to sell pork blood in Ohio?

A couple months ago, ER finally did something realistic and had Filipina nurses on an episode. They were portrayed as subversive and bitchy and accent-heavy, but hey, that's a post for another blog. And after their token appearance they promptly disappeared. But the highlight of their all-to-brief time (3 minutes, tops) on-screen was their meal of dinuguan.

Dinuguan, colloquially known as chocolate soup, or more accurately as pork blood stew, is a traditional Filipino dish. Basically, it's pork (organs or just the meat) cooked in fresh pork blood. No need to scream in terror -- it's really very good. Even Foodgoat has had it (of course, that was when my grandmother insisted he try it without telling him what it was). The blood cooks up to a nice dark brown, along with various spices. Scoop this on top of some puto (sweet rice cake), or white rice, and yum-my.

Well, ER apparently didn't see it this way, because Pratt made a face before even trying it, the fool. After that, I decided that it was time to make me some of my own dinuguan. So off to the pork stand at the West Side Market I went, and I ask for pork blood.

"We can't sell pork blood, we're not allowed."
"You're not allowed?" (Picture me, confused. I know, it's not that hard.)
"It's against the law in Ohio. Yah gotta go to a slaughterhouse. Yah can't sell pork blood outside of the slaughterhouse."
"Why?"
"I couldn't tell ya. I can get you all the beef blood you want, but no pork blood. Don't know why, blood's blood, I don't know what the difference is. I wish I could sell pig's blood, I could sell it by the gallon, I tell ya, by the gallon."

I'm not sure who he thinks would be buying the pork blood, since I only need two cups or so, but although there isn't a slaughterhouse nearby, he did tell me that the Asian market does have pork blood imported from California. So a few weeks later, I went to the meat counter at the Asian market and asked for pork blood.

He pointed to a gray, square blob.

Pork blood, as I know it, is a bright red liquid that comes in a tub. It's only solid if you freeze it. This looked well, not like that. Apparently, pork blood doesn't import well.

And so, thanks to obscure Ohio laws, I didn't make dinuguan after all. I could use beef blood, but the taste would be a little different, and call me stubborn, but I wanted the good ol' taste o' pig blood that I was used to. I may start a petition.