Heed our president: retail therapy is better than Zoloft for these troubled times. But some dealers are better than other for soothing the shopping soul. Some have fallen out of favor: exhibit A, Wal-Mart. Now, there's no shame in being poor, but my inner yuppie can only take so much of being one of the huddled masses, yearning to consume, herded thorough heavily marked down aisles and over-crowded parking lots. Not only that, my outer bleeding-heart liberal indignantly protests the exploitatative and monopolizing labor practices and general cultural bankruptcy.

But some stores have risen in its wake, at least as far as kitchen items go. Exhibit B: Costco. I don't go here for appliances. I go here for cheese. Big, two or three pound blocks of cheese. Cheddar cheese. Feta cheese. Blue cheese. Cream cheese. Or big, five-pound bags of frozen vegetables or baking soda. Or big, one-pound canisters of dried mushrooms or cranberries. (Get it? Big.) Not only do they feed the New Economy thirst for Luxe Lite, they treat their employees well and shockingly, put the members ahead of the stockholders (Fortune said so). Plus, you could get a whole meal out of all those free samples. 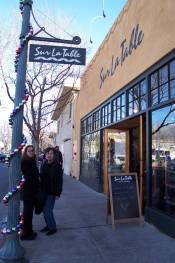 Exhibit C, Sur La Table. Forget Williams-Sonoma (which is highly over-priced, limited in selection, and full of people who may not cook at all) and go where wooden spoons fill up an entire display. Where they will in fact have the one gadget made for that one obscure task. Where you can get lunch knives and vinegar-making crocks and butter bells and lime-green mixers. Where a random person will press a 25% off coupon into your hand since they didn't find anything they wanted. It will turn out to be expired, but it was a nice gesture anyway. But you see? Nice people gravitate towards places that sell square ice-cream scoops.

Exhibit D: West Side Market. It's become something of a Saturday morning routine: bratwursts and coffee while sitting on the balcony of the West Side Market, then buying the week's supply of foodstuffs. We're regulars at Kauffmann Poultry (where you can get an Art Modell special ... boneless, spineless chicken with no guts), Meister Dairy (the sour cream is to die for), City Roast Coffee, and the Basketeria (unlike many of the other produce stands, the vegetables are always fresh and often organic). I'm also fond of the pierogies from the surly teenage girl.

Then, of course, there's always Target, whose clearance items often includes such temptations as the deep-fried Twinkie kit. (I was this close to springing for it.)

So there. Between this and my "Holy Frijole!" holiday AmEx bill, I've done my part for the economy.