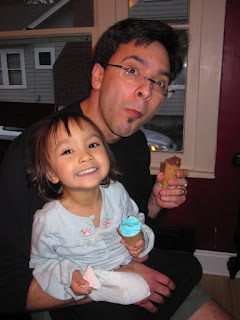 GoatSpawn loves ice cream, and her favorite flavor is Blue Cosmo from Mitchells's.  According to Mitchell's, a few years ago they got tired of telling kids who ordered "blue ice cream" that they didn't have anything that was blue, so they came up with a blue ice cream flavor.  Blue Cosmo is cotton candy flavored and includes a ribbon of homemade marshmallow.  It's definitely a kid flavor!

I don't ever remember having blue ice cream as a kid, but Foodgoat remembers his favorite flavor as a child being something called Blue Moon.  It was only available at one local ice cream parlor - what was previously known as Helen Hutchley's - but it turns out it's a regional specialty.  Blue Moon ice cream is a bright blue ice cream flavor pretty much seen only in the upper Midwest area of Michigan, Minnesota, and Wisconsin and sometimes in other nearby states, including Ohio. The flavor dates back the 1930s and varies in its ingredients and taste notes.  Foodgoat once heard of another ice cream shop that offered blue moon ice cream and found that it was completely different from what he was familiar with.  But one description of the taste, which Foodgoat confirms his version was like, is that it tasted like the milk left over from Froot Loops. That doesn't so bad, though not really as good as cotton candy flavored.

strangely enough.  For now though, GoatSpawn seems pretty happy with her Blue Cosmo.  Maybe it doesn't even matter too much what it tastes like, as long as it's sweet and it's blue.