I Can Can, Can You? Applesauce

I made applesauce! And I canned it!

I was wary, though - I thought it would be a hard, long, sweaty process laboring over peeling apples and a hot stove.  Well, it took 15 minutes to peel the apples, and that's because I'm slow with the peeler.  And it took just under an hour for the sauce.  It was much easier than I anticipated.

The jarring ... well, that's another story.  While it wasn't difficult stuff, it was a little tedious and labor intensive.  There's cleaning the jars and lids, sterilizing jars and lids, filling them up with hot applesauce, wiping the rims, processing the jars in the water bath, making sure the water bath is sufficiently full .... and then all the worrying about whether the seal will hold because the last thing I want for Christmas is botulism.

But it is highly satisfying to see a stack of successfully jarred apple sauce in the pantry.

Applesauce
5 pounds of  apples (I used Honey Crisp, which are on the sweet end of the apple spectrum)
6 cups of cider or water (I used cider)
1/4 tsp salt
(you can also add cinnamon, sugar, honey, or maple syrup as well)

First, bring the cider to boil, and reduce by about half.

Add the peeled, cored, and quartered apples and bring to a boil.  Reduce heat and simmer for about 45 minutes until the mixture breaks down and it looks like ... applesauce.  Mash it up if you like it smoother; I kept it chunky. 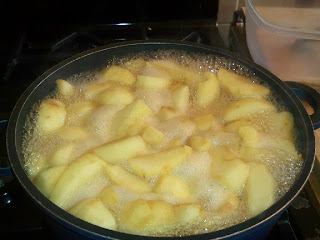 Add any additional sweeteners or flavors, but I left it plain.

And that's it!  I canned my applesauce, but you can just put in the fridge or freeze.

Next time, if I use a sweet variety again, I may use more water than cider. Using that much cider made that applesauce super sweet and apple-y.  It's very good but intense. 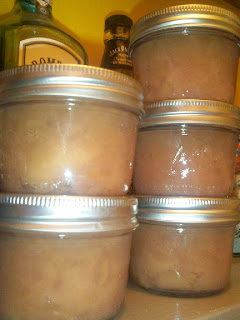 Overall, I'm pretty pleased with my first applesauce effort.    It was much more flavorful than the bland store-bought ones I've had, it was easy and simple to make, and it was nice taking advantage of the seasonal fruit.  I will definitely do this again.