Foodgoat bought a box of assorted Christmas cookies, and when he showed them to me, he told me, "Now, leave at least one kind of each for me."

To which I thought, "Aw, HELL NO, you DID NOT just try to limit my Christmas cookies."

It's his own fault that he never gets to eat the cookies in the house.  You just can't leave cookies lying around for weeks at a time before you get around to eating them.  He only just recently finished his Halloween candy.  The only reason I didn't eat them sooner is that his candy had peanuts, and eating them would probably kill me.  But they also had chocolate, so sometimes I thought about it.

So I decided the best thing to do would be to make my own Christmas cookies, so I can eat as much of them as quickly as I wanted to. 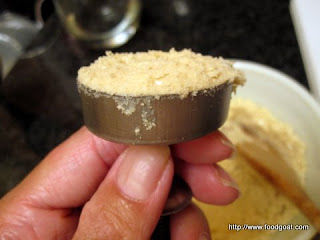 Sure, Christmas is about sharing, and I'll make enough this week to give Foodgoat his fill of polvoron.  But can't a girl give herself the gift of holiday sweetness?