How FlashForward Changed My Future

There is a Giant Eagle grocery store minutes away from my house. It is close enough to walk to, it's open 24 hours, it's large and stocked with everything I might need in a grocery store - produce, meat, whatever. It has very good prices and doubles coupons.

But I have decided I will no longer shop there. 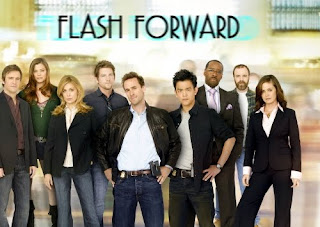 The premise is that a mysterious event causes everyone on the planet to black out, during which people see visions of their lives six months in the future.

The series follows members of an FBI unit and their friends and family as each one tries to pursue their unexpected and surprising visions of their futures (a beautiful Japanese girl! a wedding! a pregnancy!) ... or to avoid it (an affair! a death! a drunken haze in which one is being pursued by killers for trying to solve the mystery of the blackout!).

It's a pretty good show (sadly, it's on hiatus until March), similar to (though not quite as awesome as) Lost, what with questions of fate and destiny and the roles people play in each other lives and changing the future.

As I pondered these big questions, I thought of my own future, and the part I might play in the world.

And it occurred to me that the lamest possible flashforward I could have would be seeing myself in 6 months, annoyed and irritated, standing in line behind 4 or 5 people at the Giant Eagle, yet again. Or even worse: I could be at the Giant Eagle self-checkout machine, the machine that never accepts my coupons, doesn't know how much the bananas cost, and keeps telling me to bag my groceries before it will scan anything else.

If that was my great insight into my future, I would feel totally stupid.

Thus, I have taken steps to avoid that future by vowing to NEVER SHOP THERE AGAIN.

I'll pay a few cents more, I'll drive a little farther, to another grocery store where I don't have to wait in line forever, where I can get an actual cashier and someone to bag my groceries.