Buttermilk: There's More Than One Kind?

What I thought: Buttermilk is the liquid left behind after churning cream to get butter. You use it as an ingredient in pancakes or other baked goods. It's super fatty and has flecks of butter in it.

What I just learned: Not all "buttermilk" is that traditional or old-fashioned type - "buttermilk" also refers to a range of fermented milk drinks which are much closer to yogurt than to butter.

In fact, the buttermilk that you find at the grocery store is probably not traditional buttermilk, but cultured buttermilk. Like yogurt it's made by adding a lactic acid bacteria culture to pasteurized whole, skim milk or non-fat milk. It's then left to ferment for 12 to 14 hours.

The fermenting action makes cultured buttermilk healthy stuff - it comes in low and non-fat versions, it's more easily digestible than milk, it also contains more lactic acid than skim milk, and like yogurt, it is a good source of probiotics and healthy bacteria.

Armed with this new information, I poured myself a glass of buttermilk. And drank it, straight up. 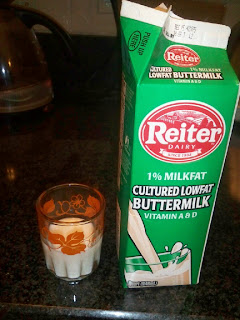 I wasn't hopeful - I poured a really little glass. I still had the image of leftover butter in my mind, and I was expecting something really rich, like heavy cream.

Sour and tangy. Cultured buttermilk tastes like a more liquidy version of yogurt. Which was totally different from what I was expecting.

It's sour enough that I probably wouldn't want to drink it alone, but mixed with a little sugar, a little fruit (like I eat my yogurt) ... maybe the use of buttermilk extends beyond baked goods!