When You Are the Food Source

August is Breastfeeding Awareness Month, and although GoatSpawn started solids at six months, it wasn't until she was about 9 m0nths that it seemed like she needed to eat much more solid foods. Until then, breastmilk was a pretty much a complete food - it had everything a she needed, all the calories, liquids, nutrients and minerals, continually changing in composition, both throughout the day and over the months, to suit GoatSpawn's changing needs.

But now GoatSpawn seems far more interested in cheese these days, but being just a few months shy of the age when she can drink cow's milk, I still have to make sure she's still getting the milk she needs. So, in addition eating oatmeal, I am drinking Mother's Milk tea. 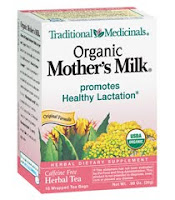 A blend of herbs traditionally used to encourage lactation, including fenugreek, anise, blessed thistle, fennel and coriander, the tea does in fact seem to work, and doesn't taste half bad. Mostly, it tastes like licorice.

What else works? Beer. It's the hops in the beer that works to increase lactation, so if you go this route, pick something hoppy, like an IPA. I see a Mother's Milk beer in the future!