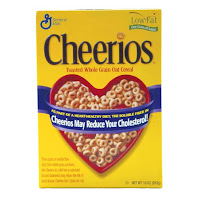 One of the first foods that GoatSpawn had was Cheerios, and since then it was become the new staple around here. Not only does she like to eat them, but they were neat. No spoons needed, already bite sized, travels easily. It didn't hurt that Foodgoat and I could eat Cheerios happily ourselves. Apparently we aren't the only ones - Cheerios is so ingrained as a popular finger food for babies Cheerios has a whole section on its website for new parents. 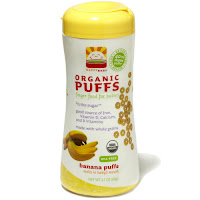 Cheerios aren't the only O-shaped baby snacks out there now, though. We tried Happy Baby Organic Banana Puffs, which had slightly bigger O's, so they were easier to grasp, came in a handy plastic container that made it easy to pop a couple of puffs out from, and they were puffier, which seemed to make them melt in the mouth a little better (an issue if you have more gums than teeth). Plus they are organic, which I presume is better for babies.

But in a head to head taste test, with both types of O's in front of her .... GoatSpawn picked the Cheerios first! And then ate the banana puffs. Which I interpret to mean that she liked the Cheerios better, and I couldn't agree more. The banana puffs to me tasted blander and less interesting, and not really very banana-y. While the Cheerios were crunchier and tastier.

Just wait until you can have it with milk! 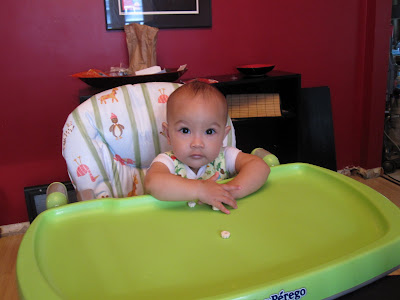