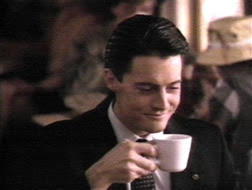 Thanks to the new channel Chiller (24 hours of horror programming!), I have finally started watching one of Foodgoat's favorite series, that early 90's package, Twin Peaks. Okay, so I've only seen two episodes, but I'm quoting it already. Not because of Lara Flynn Boyle (who is forever burned into my memory for the season she showed up on The Practice with monster collagen lips), or the young, yet oddly similar, Dr. Macy, but because of Agent Cooper (Kyle McLachlan)

Specifically, because of the enthusiasm with which the character regularly celebrates donuts, pie, and coffee (taken "black as midnight on a moonless night" and preferably not with "a fish in the percolator").