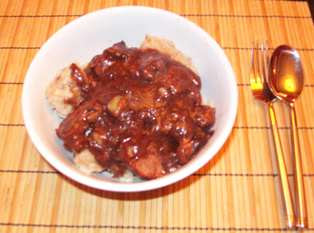 Upon tasting this, his latest creation, Iron Chef Foodgoat turned to me with wide, awe-filled eyes and proclaimed, "This is a $30 dish!"

Even the celebrated Chilean Fish Stew was only judged to be a $20 dish. And we've never even actually eaten a $30 dish. Especially a $30 dish of pork and dumplings. But if we paid $30 an entree and got this, we'd feel it was well spent.

For it was not just ordinary pork and dumplings: this was a garlicky pork tenderloin in a luscious port wine sauce atop portobello mushroom and bacon dumplings. Sounds good, doesn't it? It was. Rich, earthy, and wildly tasty. Terribly satisfying.

He had some doubts about using port wine, which was a little rough (talk about fortified) going down in the initial chug, but the final product assures port's place in future cooking. I'm pleased that he's continued to push the dumpling boundaries. To think he once took convincing to try whole wheat flour instead of white flour for dumplings!