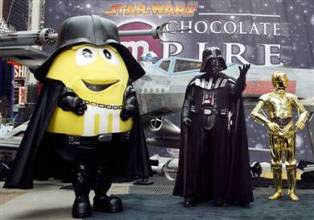 M&M's are going to the dark side. In a clever bit of cross-promotion (far cooler than McDonald's paying rappers to mention Big Macs in their songs), M&M's are rolling out their long-awaited dark chocolate version on Friday in conjunction with Star Wars: Episode III, Revenge of the Sith. The special edition "Darth Mix" features the dark chocolate in black, maroon, purple, dark blue and silver, while the "Jedi Mix" gets the milk chocolate in beige, cream, pastel green, gold and "light-saber blue" M&M's. Both the dark chocolate M&M's and Star Wars III: ROTS come with high hopes and expectations of souring grandeur. Can they live up to their promises? Only time can tell. I am looking forward to saying, in my best fake anguished voice, "I ate them, I ate them all, and not just the maroon ones, but the dark blue and silver ones too ..."