Foodgoat has been eyeing the sea bass, which we've only tried once before, at the fish market for weeks, and finally could resist no more. I found this recipe, a seafood soup from the Caribbean coast of Guatamala, in the September 1988 issue of Cook's (the previous, and frankly, better incarnation of Cook's Illustrated) to use it in.

After heating the oil in a large skillet, we added the onion and red pepper to saute until softened. Except we didn't see any red peppers at the market, so we used a green pepper. And a Hungarian hot pepper, because Foodgoat can't resist spicing things up. Opt for the red pepper only, and the soup would be more sweet than spicy.

Then the coconut milk, oregano (except we were out of oregano, so we used thyme instead), salt (and guess what? we used pink Hawaiian alaea salt that I almost forgot about), pepper, Hungarian paprika (so what if it's not in the recipe, do you think Foodgoat would cook without it??) and annato went in. Annatto, also knowns as achiote, is sometimes called poor man's saffron. It's a red seed that's used in Filipino (and Indian and Hispanic) food for its slightly bitter, earthy flavor and bright red color. It's used in the U.S. to color butter, margarine, and cheese. I had a packet, but had never used it before, and dumped a spoonful. Only later did I realize I should have ground it up.

The soup was brought to a boil and simmered on low heat until slightly thickened, but it was a little too thick so we added some water. Then the fish and shrimp were added. We used rock shrimp, which were small and easy to work with, since they came already shelled.

After simmering about 10 minutes, the banana and the tomato were added, and simmered 'til cooked, 5 minutes or so, when you then stir in the cilantro. And yes, that was a banana. Adding a banana to soup is such a novelty we took a picture of the event. 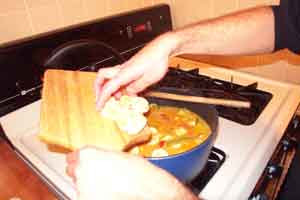 The result was quite the success. It was, as Foodgoat said, the kind of soup you might only have in an expensive restaurant: unusual ingredients, spicy (because of the Hungarian pepper), complex in flavor, and rather pretty. The rock shrimp tasted like regular shrimp, but with more flavor: shrimpy plus, you might say. The banana was the great surprise: its sweetness took well to the spiciness, and we wished we had added more than one banana. 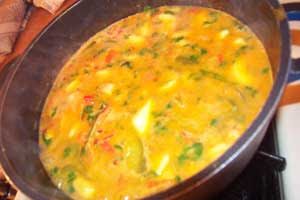