It's an election year, and I live in a battleground state, which means I really just want to crawl under a rock so I can stop being inundated with the overheated blah blah blah of opinion pieces, TV ads, fundraising calls, and news headlines.  I've reached my saturation point of partisanship, thanks!

So the only election news I've really wanted to read was about how Obama has been bringing his home brewed White House beers with him on his Iowa campaign bus tour.  Not so much about how it's an attempt to connect with those darn middle America independents, but about the BEER. 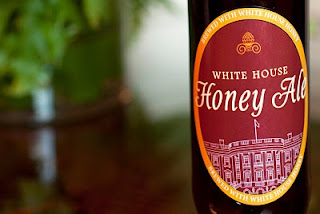 Obviously, I don't think Obama's the one hovering over the giant pot stirring the wort down. It's the White House kitchen staff.  The White House Press Secretary couldn't say exactly who the brewmaster was, saying,  "I have exhausted my knowledge about this subject.  (Laughter.)  Usually, when somebody hands me a beer I don’t ask how it was made.  I just drink it."

Foodgoat asks how it was made, and so do lots of other home brewers, so go find out, Mr. Carney!  Also find out where the recipes came from, whether they had brewed before, where the other ingredients came from, what they do with the spent grain, what they are brewing now, their preferred methods of sanitizing bottles, and whether there is a stout coming up. I am a taxpayer and I want to KNOW.  Please.  If you have time. No hurry though.

Although, alas, Foodgoat has not brewed beer, which he was doing frequently for a time, in a while.  I'm not sure why, but I'll presume it's the same reason we don't do lots of things anymore.