While I once again faced the new year with a few more pounds than I would like, GoatSpawn has been put on a diet that most of us would envy. It includes:
Basically, she has to fatten up.
So, when I came across a recipe for mirtoga, Turkish-style scrambled eggs, in an old issue of Saveur that called for an entire stick of butter per two eggs, I thought, well, it can't come any more calorie-packed than that.

Mirtoga is just scrambled eggs cooked in a roux, instead of in a bit of oil or butter.  You melt a stick of butter over medium heat, add half a cup of flour, and stir until the flour is incorporated and browned.  Add two well-whisked eggs to the pan, and then ... well, you scramble them until done.

But when it came to it, Foodgoat objected to using an entire stick of butter, when it was entirely possible that GoatSpawn wouldn't even eat it, and since I'm allergic to eggs, that would leave him to eat something that was made with 800 calories of butter.  So we made the mirtoga with half a stick of butter and a quarter cup of flour to make the roux with two eggs.  Even then, it seemed like a lot of butter - especially since he usually makes scrambled eggs with just a squirt of olive oil.

In any case, the mirtoga was a rich, toasty, heavy breakfast, perfect for babies who need to get fatter. 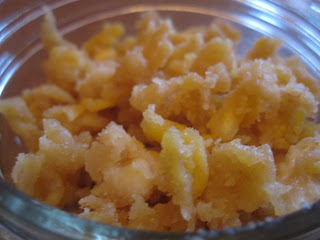