Last year, I gave Foodgoat home beer brewing equipment and kit for his birthday.
They sat, unused, for months.
Until, a) he got a really big pot, which I had neglected to include in the equipment set, and b) he watched this video on youtube that demonstrated how to make beer at home.  The video was great because it  showed, more clearly, than any written instructions could, how to use the equipment and what each step of the brewing process was and how really simple it all was.  Plus, it has a rocking song at the end.  We set up the laptop in the kitchen and played the video while making the beer, pausing and rewinding and replaying when needed, which was helpful.
Once he made the first batch of beer, Foodgoat was hooked.  Since then, he has made several more batches, with many, many more on the horizon (he recently went on a hops buying binge).
Brewing beer at home isn't hard at all, and anyone who enjoys beer should consider trying it.  In fact, more people do seem to be catching up to the idea - homebrewing was listed as one of the top food trends for 2010.
Here are the essential steps. 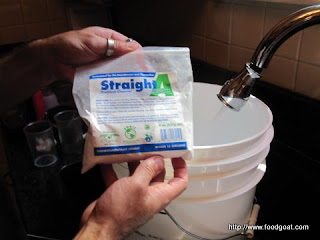 The key to making good beer is cleaning - and this stuff, Straight-A, or its even easier version, One Step, works great, especially at taking off old labels. Remember to clean/sanitize all your equipment that you will be using for after the boiling stage - because after the boiling stage, any foul bacteria introduced can ruin your beer.  So sanitize everything (tubes, buckets, bottles, etc).  It's the most tedious part of brewing, but it's important. 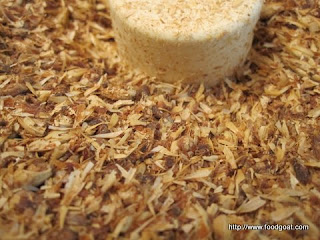 The beer kits have the grains already crushed, but Foodgoat sometimes crushes his grains in a food processor.  And it smells like the best batch of cereal EVER. 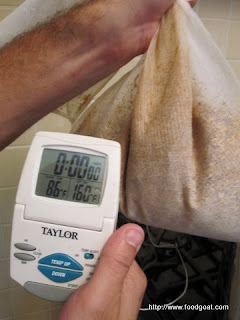 This step of making beer is basically like making a big batch of tea.  Put in the crushed malt grains (in a cheesecloth bag) until it reaches 155F and let it steep for 20mins.   Then take out grains.  Do not let it get over 165F. 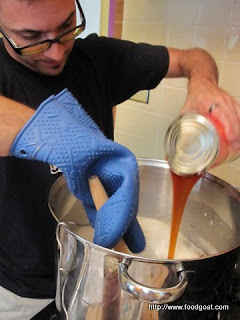 Bring your beer tea - I mean, the wort - to a boil, then add the liquid and dry malt extracts. 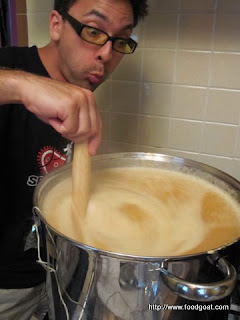 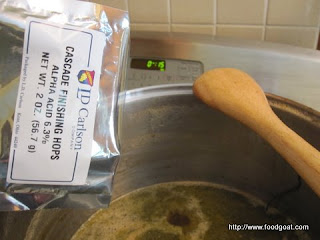 Add the hops and let boil 1 hour- then add finishing hops for a few minutes. 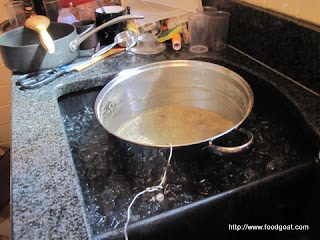 Bring the hot wort to room temperature as quickly as possible - while using a whisk to stir.  Foodgoat uses an ice bath - the kitchen sink filled with a bag of ice and cold water. 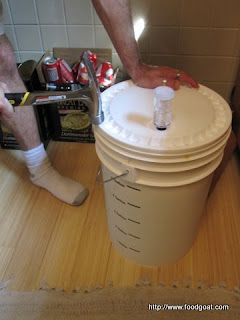 Next, add yeast - and fill water in the gas exchange thingy.  Close and let sit for 5 days at 65-80 F.  What's it doing?  Fermenting!  Turning sugars to alcohol! Yum! 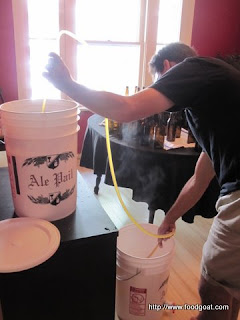 Transfer beer from the primary fermenter to either a secondary fermenter (using a clean tube to siphon) or go straight to bottling (adding a priming sugar, which makes the carbonation, to the bottling bucket) like Foodgoat did the first time. 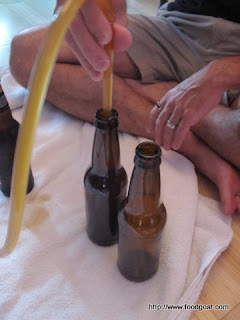 Add a tube to the spigot of the bottling bucket with the filling wand attached and fill the bottles. 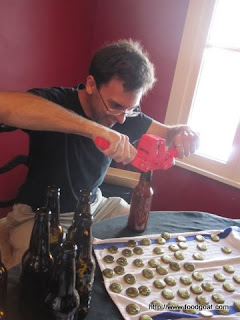 Cap it!  Foodgoat generally gets about 4 cases of beer per batch. 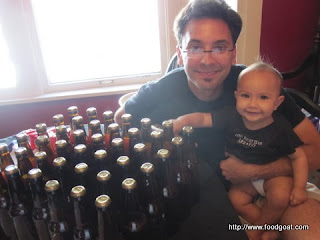