Just so you know why it's a good thing that Foodgoat does all the cooking around here, when GoatSpawn was directed to eat eggs daily, I asked Foodgoat, "So, how do you cook a hard-boiled egg?"

And then when I was by myself, I looked it up in a cookbook, too.  Just in case I remembered the instructions wrong.

I've now made hard-boiled eggs for GoatSpawn many times.  Foodgoat's method is to put in a pot of cold water, bring to a boil, and let boil for ... whenever.  Five to 10 minutes.  Cool it down with cold water

Others recommend against this, because if you boil it too long, the egg cracks.  So the method I've taken to using more is to put the egg in cold water, bring to a boil, then cover and turn off the heat for 15 minutes, then cool.  It takes a little longer, but it uses a little less energy, and if I end up getting distracted by, let's say, GoatSpawn covered head to toe in flour, and forget about the egg in the covered pan of hot water for a while, not much harm done.

Well lately, I've been looking up ... how to cook a hard-boiled egg.  Because with either method, I sometimes end up with a perfectly cooked egg ... that is annoyingly hard to peel the shell off of.

One suggestion is to let the eggs age a few weeks before cooking them - old eggs are apparently much easier to peel than fresh eggs, since dehydration causes the egg to shrink a little from the shell.

Well, I'm not going to use old eggs.  They might be easier to peel, but I can't imagine that the nutritional value is helped much.  Plus, we go through a dozen eggs in a week or less.  They just don't sit around that long here.

Another suggestion was to poke a small hole in the egg prior to boiling - a tiny hole just in the shell, not the inner membrane, to allow water to get in between.  So I tried it, just the sharp tip of a small knife. 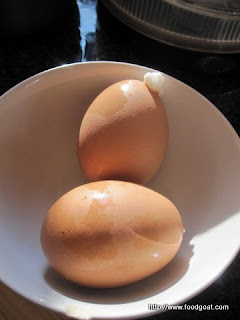 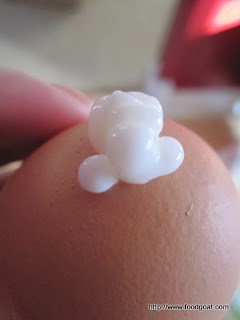 Hmm.  Looks like I poked through the membrane after all.  So a bit of egg white oozed out while cooking.  Yeah, that looks weird. 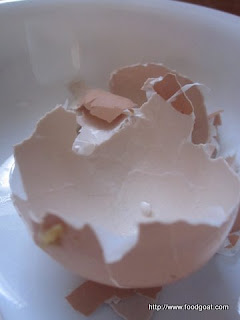 But, it did turn out to be very easy to peel.