A Convert to Scallops 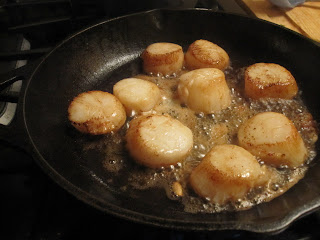 Foodgoat was surprised to learn, after he made them for dinner, that I generally don't care for scallops.  When I've had them before, they have tended to be tough, or overcooked, or reminded me a little too much of fish balls (which I can't stand).

Scallops are mollusks, much like oysters.  In most other countries, they are sold whole and in the shell (which is that traditional seashell shape like the Shell Oil logo), as oysters are, but in the U.S., scallops are usually sold as just the trimmed, white, meaty adductor muscle (this muscle is much bigger in scallops than in oysters because scallops are active swimmers and migrate!). 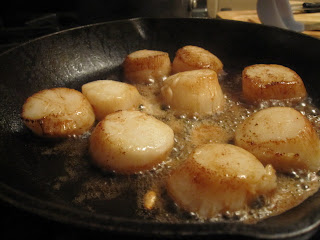 But the scallops he made, simply sauteed in a hot cast iron skillet filled with butter, were delicious - smooth, soft, and delicate.  Almost creamy, and a little bit sweet.  He put them on a bed of lettuce and spinach couscous and topped them with a simple white sauce and a slice of lemon.  Not only was it delicious, but it was an incredibly fast meal to prepare - it took Foodgoat, on the outside, maybe twenty whole minutes. 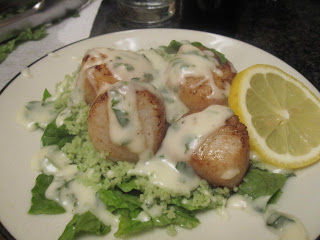 Easy, quick, and most importantly, so yummy.  Enough to convert me over to being a fan of scallops.