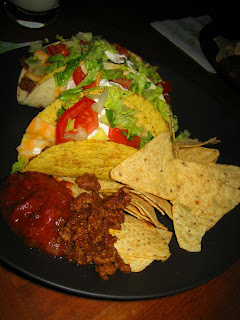 The other night I saw a taco on South Park, and crudely drawn as it was, it set off a craving in me for tacos. Hard shell tacos, which I haven't had in years and years, since Taco Bell had them for 59 cents.

Rather than suffer through Taco Bell or even one of the unexceptional Mexican places around here, we hit the grocery store for our very own Taco Night.

Foodgoat reconstructed an old Taco Bell favorite - the Double Decker taco, in which the hard taco shell is inside a soft tortilla, held in place with refried beans. It sounds freaky and unnatural, but it does the Great Flaw of the Hard Taco Shell - one bite sends cracks all over your containment system, and structural integrity is lost. An outer layer of soft tortilla and refried beans, however, keeps it all in prime eating position. Oh, and it tasted pretty good, too.