Sometimes Foodgoat Amazes Even Himself 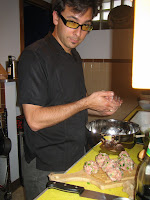 Oh, why choose? Instead he took an already good recipe for Lion's Head Meatballs from the August issue of Eating Well magazine and made it even better. 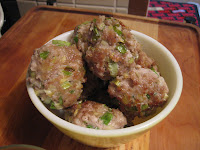 Lion's Head meatballs (don't worry! the name is purely metaphorical) is apparently a classic dish of the Shanghai and Yangtze regions, and sounded an awful lot like a Chinese version of stuffed cabbage.

The meatballs are made of ground pork, scallions, leeks, ginger, chopped hot chiles and sesame oil (along with a bit of flour and cornstarch and salt and pepper), browned in olive oil. They smelled exactly like pot stickers: so much so that Sienna The Dog came in to the kitchen to investigate. 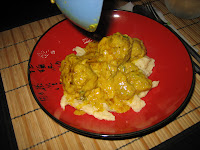 The meatballs were then cooked in a sauce of soy sauce and coconut milk, with Foodgoat ramping up the Indian flavor with his own curry mix, which leans Bangladeshi. He also added tomatoes, fresh ginger, and, because everything he cooks has them, paprika and sour cream.

I think some wine must have gone in too because when I went to refill my glass the bottle was empty.

And instead of serving them on cabbage or lettuce, Foodgoat served them on Hungarian dumplings.

The result sure hit the Foodgoat spot: flavorful and saucy and delicious, yet very different from anything he's made or had before. This is the kind of cuisine that Foodgoat cultivates - Hungarian fusion.