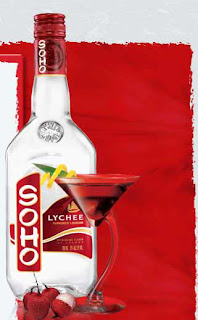 The bottle of Soho Lychee Liqueur just screamed to me: "gimmicky accoutrement of superficial trend-followers who take up a quasi-Asian aesthetic in a sorry attempt to affect an exotic sophistication!" So of course I had to try it.

Lychees, if you haven't had them, are tropical fruits that grow in the Philippines and other Asian countries. They're like raspberries in texture, being soft and squishy (inside of the red rind, anyway), but sweet in flavor.

Made in France by Pernod Ricard, one of the largest alcoholic beverage companies in the world (brands now owned include Kahlua, Stoli, Seagram's, Chivas, etc), and launched in the U.S. last year, Soho is just made for fruity cocktails. It smells absolutely heavenly (mmmm, lychees ...) and mixes well with all sorts of fruit juices. I had it with fresh limeade, and give it a thumbs up.

By itself, it's definitely on the sweet side (although not overwhelmingly so) but it is pretty smooth, making very some very nice summer sipping in the kitchen in the early evening while one's husband (tee hee!) is making bacon avocado blue cheese sandwiches for dinner.

So I like it. Does that put me in their target audience of the bourgeois bohemian?