Normally lunch at Disneyland consists of quick burgers from an outdoor stand or leftover bagel sandwiches sneaked out from the Embassy Suites free cooked-to-order breakfast. Not this time. This time, when we went to Disney's California Adventure, we dined at Ariel's Grotto. Instead of a $7 burger in the hot sun I had a $15 Ship-Shape Cheesy Onion Soup and Cove's Chicken & Biscuit Pot Pie (both huge though a bit salty), really good sourdough bread (probably made at the on-site sourdough factory, which has tours and free samples; there was also a tortilla factory, which was much less interesting and gave a pretty untasty sample), and a pile of after-dinner cotton candy in air-conditioning and a table with a view. Between everyone, I think we got almost all of the entrees on the menu, and they were all just fine. I am chagrined to find out only now that the child menu items can also be ordered in adult-sized portions: I could have gotten the Ursula's "Octa"-dog with Mac 'n' Cheese!!! What a missed opportunity.

But enough about the food. The really fun thing is, of course, the Disney characters that visit/pose for pictures with you during the meal. It was our first time at one of these character-dining places, and, I'm not ashamed to say, I liked it. I couldn't quite bring myself to pose with what we suspect is a career Ariel at the front who gets wheeled into the back at the end of her shift, nor could I squealingly ask Chip (or was it Dale?) and Pluto for their autographs, like the trio of fully grown Japanese women at the next table did. But it's a whole 'nuther thing when Goofy comes around. As you can see, Foodgoat was more than happy to make the sacrifice and be the one behind the camera. 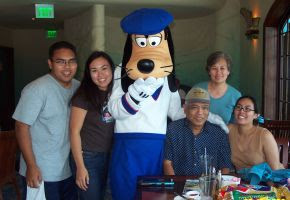