Foodgoat loves his French press coffee. So he was surprised to the see health advice at work saying that a little coffee every day is okay, as long as it wasn't boiled or French press.

What?  What difference would it make, health-wise, if the coffee was boiled or French pressed?

In the 1980s, Scandinavian doctors first noticed that coffee drinkers tended to suffer from high cholesterol more often than those who didn't drink coffee.

While caffeine is the chemical we usually associate with coffee, it's not the caffeine causing this effect.  It is another of the many other other natural compounds in coffee - cafestol. 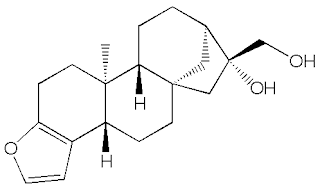 Cafestol, found in the flavorful coffee oils, is a terpene, a class of organic compound are the main component of essential oils and resin (from which turpentine is produced).

But, look what cafestol does:
The impact of cafestol on cholesterol is can be significant - cafestol is routinely described as the most potent cholesterol-elevating compound known in the human diet.

One study found that 10 milligrams of cafestol (or four 5-ounce cups of French-press coffee) may raise cholesterol by 8 to 10 percent in four weeks.

And of course, cholesterol can be deposited in artery walls, increasing the risk for heart disease.

Why Brewing Method Matters
Because cafestol is in the oils of coffee, though, using a paper filter (as in drip coffee brews) captures much of the oil and results in very low levels of cafestol.  So cholesterol is unimpacted.

In unfiltered brewing methods, including French press, boiled methods such as Turkish coffee, and espresso, the oils remain in your coffee.  It gives better flavor, but also leaves all the cafestol in it, so your cholestorol gets the full impact.  (Note, in Scandanavia, where they first noticed the cafestol effect, the typical coffee brewing method is a boiled method).  Cafetol is highest in Turkish coffee type brews, next highest is French press, followed by espresso.

So, does this mean French press coffee is unhealthy?  I don't think so.  The impact on cholesterol is significant, but still is less than the influence of other factors, including:
Since I'm not concerned about my cholesterol level or overall risk of heart disease,  I'm just going to go ahead and keep drinking my French press coffee.